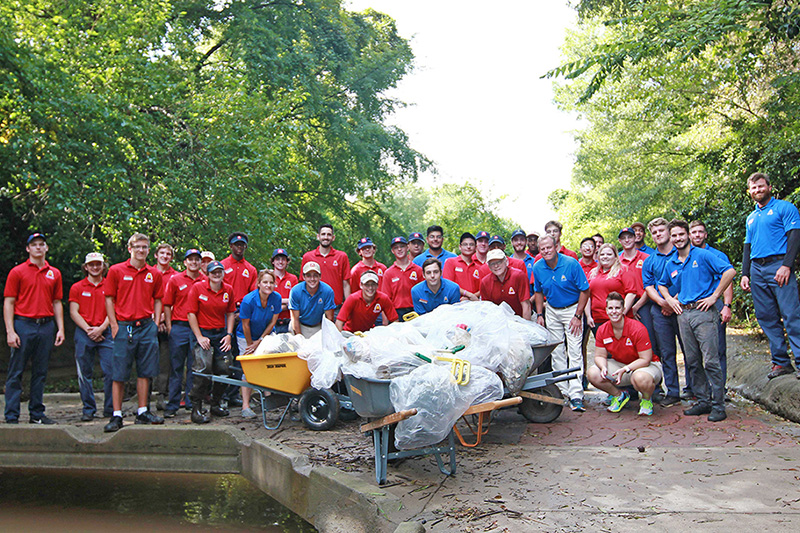 CHARLOTTE, N.C. — Autobell Car Wash recently conducted its annual cleanup along the company’s designated portion of the Little Sugar Creek Greenway as part of the Charlotte-Mecklenburg Utilities Adopt-A-Stream program, according to a press release.

The Autobell Creek Walk began in 2000 in conjunction with Mecklenburg County’s launch of a major stream restoration project for this important waterway, the release continued.

In August, 36 Autobell team members from 15 of the company’s local stores as well as the home office spent two hours scouring the waterway between East Blvd. and Morehead St. to collect trash and debris from the creek bed and banks, the release noted.

Team members are paid by Autobell for their time during the cleanup and provided hydration and lunch vouchers by the company, the release added.

The haul collected approximately 150 pounds of trash, while cleanup efforts were hampered somewhat by the previous night’s storm that flooded the waterway, leaving the creek high and moving fast, the release continued.

“This is our 20th year for this Autobell tradition here in our hometown, and it’s still a thrill and honor to see our folks come together for the chance to serve the community,” stated Autobell CEO and owner Chuck Howard, who joined the cleanup along with other Howard family members spanning three generations. “We relish helping make the greenway safe and pleasant for wildlife, people, and pets.”

The Autobell Creek Walk is one representation of the company’s ongoing commitment to environmental preservation, the release noted.

In addition to other waterway cleanups conducted within the company’s five-state area, all Autobell locations treat 100 percent of wash water used and recycle up to 100 percent with technologically advanced equipment, as well as practice other on-site water conservation procedures, the release added.

In conjunction with Charlotte-Mecklenburg Schools and UNC Charlotte, the company also co-created and sponsors the annual Autobell Creek Challenge®, a STEM-based curriculum and competition for elementary school students that focuses on water science and quality, as well as the vitality of our local creek system, the release concluded.