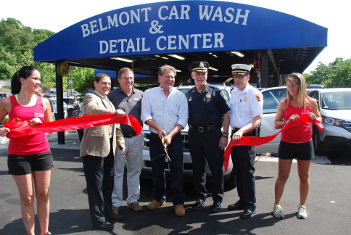 Across the United States a multitude of small, successful businesses are built on families and community relationships. In some instances multiple generations work together under one roof to build and grow a business over decades. Even today as local economies grow and transform, family-owned enterprises often excel at developing relationships and maintaining positive reputations in the towns and cities where they operate.

Belmont Car Wash & Detailing is a good example of a family-owned operation that built its long-term success on a foundation of relationships and reputation. According to General Manager Adam Tocci, his father, Paul Tocci Sr., opened the carwash in 1964. Adam’s brother, Paul Tocci Jr., took over operations when he turned 18 and has run it ever since. For the past 50 years, Belmont and the Tocci family have been associated with the New England Carwash Association (NECA) and the International Carwash Association (ICA).

Over the years the quality of service provided by the carwash has always been the first and foremost concern, Adam Tocci explains. But today many carwashes offer wonderful, exceptional service. One of Belmont’s secrets is having a strong management structure in place. This allows the wash to treat every customer with personal care.

According to Tocci, employees towel dry every vehicle as it emerges from the tunnel. Employees at the tunnel exit communicate with customers and make sure they are happy with wash results. Tocci calls this a “concierge service” and compares it to services a hotel may offer.

“We have someone escort them out and go over the car and make sure they’re pleased with it before they leave,” Tocci states. “A combination of staff really doing a wonderful job and giving the personal attention to the customers is the key.”

Today the wash’s most popular express detail is the Super Interior Cleaning. In this package:

Tocci says the package also includes the washing of vinyl and leather, and doorjambs are blown out, including cracks and crevices. “It’s a very general cleaning, but it’s the most popular.”

For the wash’s online services, the seasons and weather often influence which tunnel package is the most popular. The Belmont is an extremely popular package that includes:

Utilizing a stable staff is one secret to Belmont’s high level of service. Currently the average longevity for Belmont employees is eight years, Tocci says. This longevity is the result of specific hiring and employment practices.

First, the Belmont staff receives constant training, Tocci notes. The wash has monthly training seminars for its workers. This practice ensures management, and employees are always on the same page when it comes to on-site issues and customer service.

Also, many of the wash’s new hires are now recommended by people who are affiliated with the business currently. This can be a family member of a current employee, or even employees’ children. For workers who have been with the wash for 10 or 15 years, they sometimes have children who have reached legal working age and are interested in Belmont.

“They either come with a recommendation or there’s some type of connection to the family,” Tocci continues. “That does help because that perpetuates that family atmosphere.”

To celebrate the carwash’s recent 50th anniversary, the Tocci family renovated the building and its tunnel. “We gave the entire carwash a facelift: renovated the waiting room; the exterior. We basically re-equipped the entire tunnel; we have a 135-foot long tunnel,” Tocci says. “We [also] changed some of the express detailing systems around. So really, it’s like a brand new carwash.”

The focus for the equipment update was adding the newest technologies available in the market. Tocci states that the carwash was previously putting out a great product, but there was still extra room in the tunnel. After learning about new technologies at carwash conventions and other events, the family was interested in installing new equipment.

“We think that we improved upon what was already a very good product. If you stay stagnant in any industry, things tend to pass you by. So we wanted the newest technologies in there, and that’s what we got,” Tocci explains.

For the tunnel equipment upgrades, Tocci states that the additions included:

Another exciting change during the renovation was the waiting room remodel, according to Tocci. Previously the waiting room had glass panels, and the noise from the wash blowers was rather loud. While the panels allowed customers to see inside the tunnel, the area was otherwise a standard waiting room.

Now the area features design elements similar to a modern car dealership, Tocci says. Walls with soundproofing were created to enclose the area, and the waiting room now includes free Wi-Fi, large screen TVs, workspaces and couches for customers. A glass-front refrigerator with free beverages was added as well, and hot coffee is available. Today the waiting room is the “showpiece” of the carwash renovation.

The wash’s 50th anniversary celebration took place on June 21, 2014, and a local radio station broadcasted from the site and played music during the event. The station’s on-air personalities took pictures and signed autographs with customers. Three vintage cars from 1964 were on-hand, and people had their photos taken inside the vehicles. There was also a spread of food with barbecue chicken, hot dogs and hamburgers available all day long.

“People were just coming in off the street, riding their bikes by, stopping and having a bite to eat and a soda or water,” Tocci remembers. “We had a lot of people stopping by giving us their well-wishes, a lot of the long-time customers.”

There was also a ceremonial ribbon cutting that included the local chief of police, the chief of the fire department and one of the town selectmen. Later in the day, a state senator stopped by to express his support, according to Tocci. Local news coverage of the anniversary event included some local cable stations as well as interviews with area newspapers.

Tocci states that one of the biggest attention generators for the event was the rollback pricing. Carwash packages were rolled back to 1964 pricing. This means the basic Soft Touch carwash package cost $1 and a package that included wax was $2. “We kept that pricing in place from June 21 … right through July 4. People had two weeks of rollback pricing that they took advantage of, and it was a nice way to say ‘thank you’ to our customers.”

Tuning in radio and promotion

When it came to landing the live radio broadcast, the public relations company Belmont uses assisted in the process. Radio station WROR sent its long-standing morning crew, Loren and Wally, to the Belmont event. Tocci states the duo’s morning show has been on the air in the Boston area for more than 20 years, and his brother, Paul Jr., knows Wally pretty well. Paul Jr. first discussed the event with Wally one day over coffee. Wally explained the event should be promoted on the radio station. The wash purchased some advertising time on the station, and this promotion helped publicize the event and encouraged people to attend.

The carwash’s philanthropic work helped spread the word about the anniversary celebration as well. “We usually hold six fundraiser days a year where a fundraising group will actually come in and dry off the cars, and all the tips and a portion of the proceeds will be donated to these groups,” Tocci says. “So for years we’ve been heavily invested in the community.”

Leading up to the anniversary, the Belmont team figured out that the business was also donating raffle tickets for gift cards and books to various raffles or golf tournaments about twice a week. For the anniversary event many of the local groups Belmont worked with previously stepped up to help with promotion. “It was really nice because most of these groups spread the word. There were emails going out,” Tocci states.

Different media channels reported on the celebration before the anniversary as well. “The local paper did a very nice article and … then it just took off,” Tocci shares. “The local cable station did a 15-minute promo on it, and people were just spreading [it] word of mouth. It really was just one of these things that steamrolled as we led up to it, and it really was a nice response.”

Moving past their big anniversary, the future looks steady for Belmont Car Wash & Detailing and the Tocci family. Though Belmont is currently a second generation business, the family’s younger generation is now showing interest in taking over the wash in the future. In fact, the business has been developed to be generational. “Both my brother and I have sons that have expressed interest in going into the business as well,” Tocci concludes. “We’re here for the long run.”

Business: Why and how to capture consumer data

Marketing and Advertising: The battle for data