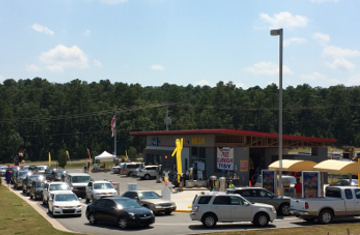 Good employees, a strong brand and an exceptional wash experience are important to helping Boomerang meet its mission.

Arkansas-based Boomerang Carwash strives to live up to its name. Since it survives on repeat customers, says Ed Colvard, VP sales/marketing for the company, “Boomerang” was a good fit.

Colvard says Boomerang’s commitment to clean is what sets it apart from other carwashes. The staff members take their mission, “to provide the highest quality express carwash and exceptional customer service at all times resulting in customer loyalty and a repeat customer-base,” seriously.

“Customers do not want to pay for a carwash — they want a clean car,” says Colvard. “[We] consistently provide a value proposition of speed, quality and affordability.”

Boomerang CEO James Burks says the carwash uses high-end equipment and quality chemicals. It also has its own service group, which brings a lot of expertise to the organization. The service team has collectively built 40 tunnel carwashes, and it consists of chemical and equipment experts.

“We have the skills set within our organization that does not exist with most carwash companies because they don’t have the size to do it,” says Colvard. “We’ve got a lot of good people. And what we’ve said is, if we focus on the highest quality express carwash and exceptional customer service, then we can achieve our business model.”

The Boomerang business model is that people only come to Boomerang because they know they’ll get what they pay for. What’s amazing to Burks is that the more than 10,000 surveys they’ve done throughout the years show about 40 percent of customers wash once per week.

“What [the surveys] told me is that we have changed people’s purchasing habits for carwashes because of the convenience, because of the value, because of the quality,” states Burks. “If you can let people drive clean and feel great about the car they’re in, then they will come back.”

A strong brand is instrumental in establishing a business. Boomerang has worked hard to create that. A quality wash is important, but so are a strong image and reputation. “We constantly create imagery, campaigns, etc., that are commensurate to our name,” Colvard says.

“We’ve tried to keep it very simple, clean, direct, and we think that each of our washes offers great quality for what you’re paying,” notes Colvard.

Boomerang also uses promotions and other media to keep its customer base strong. Grand openings are held when a new location opens, and they are designed to create hype and community interest. Colvard says they are created with the mantra in mind: “Bring ‘em back.”

The company’s charity involvement doesn’t stop there. According to Colvard, it supports local organizations like schools, little league teams, clubs and more.

Colvard says supporting charities also brings in new business. “They market our product to their supporters and generate revenue, and we get new customers in the long run,” he explains.

The partnerships with local charities can also bring media attention to the carwash. “If you work the media right, they’re interested in what organizations are doing for local charities,” says Colvard. “What we do is we give the carwashes for free, and then the charities can build upon that and get donations from customers. It works wonderfully.”

But media outlets are not only interested in charity work, and Colvard says Boomerang does what it can to get free press.

“If we go down and see the TV people, develop relationships with the local radio broadcast team, and you start washing their cars for free, and you start showing them what we’re doing, they’ll start talking about you,” he says. “They want to know what’s going on because they drive automobiles too.”

The grand opening celebrations help Boomerang create “a little buzz,” as Colvard says, with the media. During one grand opening the carwash had planned to close at 8 p.m., but customers were still lined up at 8:30. Finally the wash had to close and let employees go home. Colvard says even those who were turned away said they would come back another day. They had been acquainted with the brand.

The carwash chain also uses various media to ensure every patron becomes a repeat customer. Colvard says they have used direct mail, radio (including remote broadcasts) and television, but the roadside sign has been the most effective method for the washes.

In another effort to keep the customer coming back, Boomerang tries different things to interact with customers. Employees are a critical part of this. They are taught to make eye contact with every customer and to distribute print materials when needed. The carwash also gives customers safety pop suckers, which Colvard says always bring smiles to young and older customers.

Attendants walk the walk regularly using soft towels to wipe any excess water off of cars, having brief encounters with customers and lending a hand where appropriate.

Social media has also become an important part of the company’s strategy. Boomerang began using Facebook in 2013 with help from a local company. Though they didn’t know what to expect at first, Burks says the contests run on the Facebook page are “wonderful.”

The first contest the company ran posed the question, “What do you love most about Boomerang?” It received 700 comments about various aspects of Boomerang’s business.

“It was great feedback also to people who work in the stores, because what they can see is that people appreciate this,” says Burks. “How many jobs are out there where you can make someone feel great? But a great carwash can make people feel great. They look at their car, and they say, ‘man, my car looks great.’”

Burks says they have been able to interact with and expand their customer base through their Facebook activity.

“It’s a slow and steady gain to reach out and to get in touch with people within our market, people who use Boomerang,” explains Burks. “We hope to keep it going. We’re finding it’s a good way to communicate/interact with our customer base.”

The Right Chemicals and Equipment

The Boomerang brand extends throughout every part of its operations. When carwashes began introducing add-on services like hot wax, the chain studied and researched. Then Colvard, along with the service team, decided to create something unique to Boomerang.

“We didn’t want to be left out of that, but we studied that for years,” says Colvard. “What we decided is that we wanted to have our own thing.”

The company learned about the chemistry of the process and how materials work on an automobile’s surface. Rather than promote another company’s product, Boomerang created its own special wash called the Joey Punch Power Shine.

Colvard says the wash makes cars look new again. Families love it because it’s like a show, with its lights and foam. The lights also add to the uniqueness of the experience, and they let customers know they’re getting something special.

Colvard says the company’s selection percentage has gone from zero to 25 percent since introducing the Joey Punch.

Part of meeting Boomerang’s mission statement comes from investing in its employees. Since it is difficult to find experienced tunnel operators, the company has developed a training program and hired a training coordinator for new employees.

“We want everything to be colorful because automobiles come in different colors, and so do people,” notes Colvard. Employees can wear whatever color they feel like wearing as long as it’s a Boomerang shirt.

With 32 locations, Boomerang finds it operates best as regional teams. Team leaders are over each region, and Burks says it’s a hard job, so they need to make sure they support each other. The training program helps with that.

“We can’t fulfill our mission statement if we don’t have great people,” says Burks.

In addition to its investment in employees, focus on promotions and marketing, and providing a quality wash for customers, Boomerang is also interested in being a good steward of the environment.

Colvard and Burks say there’s an economic side to this issue as well. Not only do their carwashes protect groundwater and conserve water during shortages, but it also costs less to use less water.

Since Boomerang’s 32 locations are spread across six states, water prices vary. Recycling water helps the company save money and contribute to a greener Earth.

Most Boomerang locations are members of WaterSavers, an international carwash organization. Colvard says only two of its locations do not have water reclaim systems, and the company did not develop them, but it acquired them.

The company also pays attention to the products it uses to get customer’s cars squeaky clean. All soaps and detergents are biodegradable, and they all go into the sewer to be treated, instead of going into the groundwater, which can happen with at-home carwashing.

Business: Why and how to capture consumer data

Marketing and Advertising: The battle for data