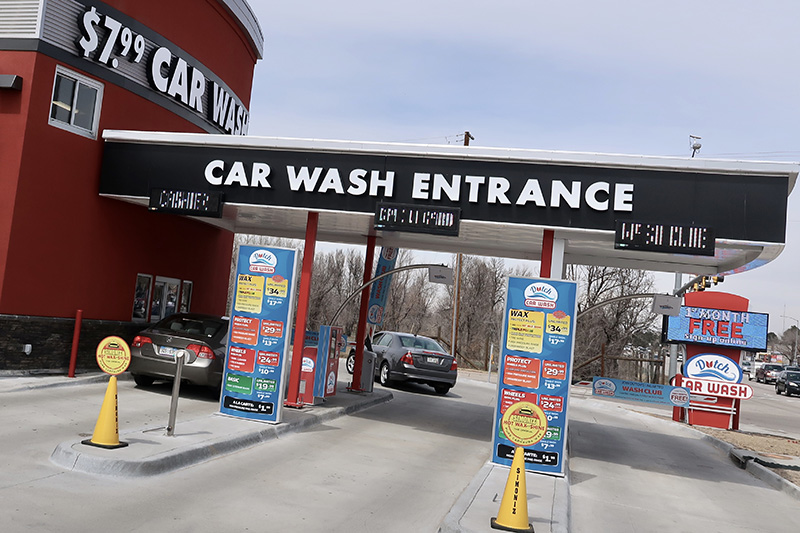 This week, we cover grand openings, a charity event, a franchising opportunity and a trade show announcement.

This week, we cover grand openings, including that of Dutch Car Wash; a charity event; a franchising opportunity; and a trade show announcement.

To kick off the opening, Dutch offered free carwashes for nine consecutive days, during which the company washed approximately 8,000 cars, the release continued.

Dutch Car Wash is planning a grand opening in mid-May, the release noted.

From drawings and construction, to equipment installation and chemical, Focused Carwash Solutions helped Dutch Car Wash morph from the idea it was two years ago into the impressive wash it is today, the release stated.

Dutch features a 95-foot dual belt conveyor inside a 110-foot building, vacuums with arches and a reclaim system, the release noted.

“This property was a challenge from the start with less than an acre to work with before setbacks and landscaping,” explained Focused President Aaron Green. “We utilized every square inch of the property to fit the carwash there. We couldn’t have done this project without the dual belt. The … building really stands out on this corner and brought a dead corner to life.”

COLUMBUS, Ohio—​ Moo Moo Express Car Wash has announced the donation of $15,430 to the Central Ohio chapter of the Muscular Dystrophy Association (MDA), according to a press release.

The donations were collected March 15-17, 2019 at all 15 Central Ohio Moo Moo Express Car Wash locations and have been designated to send more than seven local kids to MDA Summer Camp this June, free of charge, the release continued.

Throughout the MDA Summer Camp Donation Campaign, Moo Moo Express offered a free “Whole Plus” carwash ($13 value) to customers in exchange for a $5 monetary donation, and 100% of proceeds benefitted the MDA campaign, the release noted.

At the campaign’s conclusion, Moo Moo gave away more than 3,000 free carwashes, totaling more than $40,000 at full retail value, the release stated.

“The opportunity to give children fighting muscle-debilitating diseases the experience of a traditional summer camp is unbelievable,” said John Roush, CEO of Express Wash Concepts and founding partner of Moo Moo Express Car Wash. “As an annual campaign, we are thrilled that we increased this year’s MDA Summer Camp monetary donation by 14%. We appreciate the continued support of our staff and customers for this initiative.”

GREENWOOD VILLAGE, Colo. — Grease Monkey International LLC, part of the FullSpeed Automotive™ family of brands and one of the fastest growing franchise concepts in the country, announced it is working with ApplePie Capital to offer new and existing franchisees access to up to $20 million in debt capital to drive continued expansion across the U.S., according to a press release.

“Grease Monkey is committed to helping our franchisees grow and prosper, and we are excited to launch this program with ApplePie. They are franchising professionals who understand the needs of our franchisees to help foster their growth. Their decision to allocate $20 million to Grease Monkey franchisees will help us achieve our accelerating expansion efforts in key target markets across the U.S.,” said Ralph Yarusso, chief development officer for Grease Monkey.

“As a multi-brand international franchisor, we chose ApplePie Capital as a preferred lender because they took the time to learn about our business model and our core values. Their knowledge of the franchise industry enables them to offer a multitude of loan options to our franchisees. ApplePie’s ability to customize loan programs for a first-time center owner or a multi-center operator brings a unique component to the relationship that can be challenging to find with other lenders,” said Jeff King, director of franchise development.

“ApplePie Capital is thrilled to partner with Grease Monkey to help support their growth more quickly and efficiently,” said Denise Thomas, CEO and co-founder of ApplePie. “When selecting brands we want to partner with, we look for franchisors with strong unit-level economics, low closure rates and successful franchisees. Grease Monkey’s track record in these areas made it an easy decision to embark on what we hope will be a long-term partnership. The options we are able to provide often do not require personal collateral, and we have introduced a lower pricing model to help them accelerate their aggressive growth plans.”

Franchisees interested in getting started with a free consultation can contact ApplePie by visiting applepiecapital.com/grease-monkey or contacting Matt Sawicki at [email protected] or 734-207-0800 ext. 210.

SAN ANTONIO — AutoBrite™ will be bringing its advanced belt conveyor technology to the International Carwash Association (ICA) annual convention, The Car Wash Show, Booth 1157, in Nashville, Tennessee, May 13-15, according to a press release.

Lawrence Stovall, president of AutoBrite Co., will also be a featured speaker at the ICA Car Wash Show talking on “Innovation Technology” at a Quick Hit presentation on Tuesday afternoon, the release continued.

AutoBrite is the exclusive North American master distributor for Chia-Ma, the release noted.

The company has a proven track record of installations in over nine countries, including the U.S., as well as contracts with automotive dealerships for popular brands such as Toyota, Volkswagen and Audi, the release stated.

AutoBrite provides on-site assembly for all three belt conveyor options that can be utilized on a new carwash system or retrofitted over existing conveyors, the release added.

The company will also have a miniature model of the popular ModBrite™ tunnel system, which drastically increases the number of cars washed per hour; has a small, IBA-sized footprint; provides superior clean; and features the elimination of rollers and chains, the release stated.

“As an industry leader in the auto car wash conveying solutions marketplace for over 50 years, we are excited to be the exclusive North America distributor for Chia-Ma conveying car wash products,” said Stovall. “Our company’s long-respected history in the carwash industry as a chemical manufacturer and equipment distributor makes for a bright future with our conveying equipment joint-venture.”

The carwash put on the finishing touches that morning before announcing on Facebook that it was open for business, the article continued.

To celebrate the opening, Club Car Wash offered its $18 carwash for just $1 from April 11-19, and each wash came with a free vacuum, the article concluded.

HOUSTON — According to www.communityimpact.com, Ocean Express Car Wash will open its fourth location in the Greater Houston area in September at 8951 Hwy. 6 N.

Ocean Express’ other locations are in Webster, Pearland and League City, Texas, the article concluded.