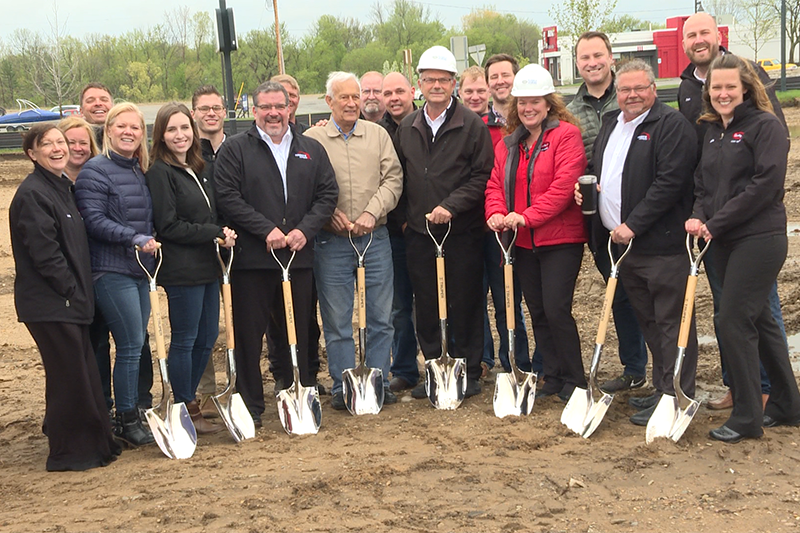 This week, we cover a groundbreaking, a new hire, expansion, acquisitions and a grand opening.

This week, we cover the groundbreaking of a new Tommy’s Express Car Wash, a new hire, expansion, acquisitions and a grand opening.

JENISON, Mich. — Tommy’s Express Car Wash is pleased to announce the official groundbreaking of a new corporately-owned express carwash facility at 155 Chicago Dr. in Jenison, Michigan, according to a press release.

The wash joins a similar location in neighboring Grandville, Michigan, with a third planned for the northern greater Grand Rapids area, the release continued.

The groundbreaking event on Friday, May 11th was attended by members of the Tommy’s Express Car Wash Franchise leadership team as well as project managers and representatives from sister company and carwash developer Tommy Car Wash Systems, the release stated.

According to the release, highlights of the upcoming carwash include the distinctive “Totally Tommy” architectural design; Wash Club license plate reader system; Tommy Transporter Dual Belt Conveyor; high-end stainless steel equipment; and integration with the Tommy’s Express App, which allows club members the ability to sign up and manage their memberships from a mobile device.

Tours of the Grandville Tommy’s Express Car Wash are available to interested parties upon request, the release concluded.

FOOTHILLS, Calif. — Total Recon Solutions (TRS), a business management consulting company, has hired Chris Evans as a manager/trainer, according to a press release.

Evans is an International Detailing Association (IDA) member who’s a Certified Detailer/Skills Validated (CD/SV) and sits on the Certification Committee for the IDA, the release continued.

Bringing 30 years of experience in the detailing industry, 12 years of management experience and almost 10 years of training experience, Evans is truly prepared for his new position as manager/trainer, the release noted.

TRS is a business management consulting company that was established in 2011 by Santiago Rydelski in Foothills, California, the release stated.

Since then, the company has expanded nationwide and is one of the top management firms for auto auction chains in the country, the release added.

Evans appeared on the first season of Mike Phillips’ TV show “Competition Ready,” which is about the best cars and detailers in the industry, the release noted.

Evans was also recently nominated for the Board of Directors with the IDA, the release concluded.

LAKEVILLE, Minn. — ChemQuest, Inc. broke ground on a 23,016-square-foot building expansion of its manufacturing and warehouse facility located at 21365 Hamburg Ave., according to a press release.

The $1.7 million expansion will include 600 square feet of new office and restroom space and 22,416 of additional warehouse space, the release continued, expanding the existing two dock doors to four and adding a second drive-in dock space.

ChemQuest, Inc. currently operates out of two owned facilities and one leased 5,000-square-foot warehouse space, the release noted; the expansion will eliminate the need for the leased space, creating more operational efficiency.

The expansion allows for increased manufacturing capacities to keep up with the continued growth of existing and new customers, the release added.

ChemQuest, Inc. is dedicated to providing customers with superior products, service and delivery, making the expansion necessary, the release continued.

The project is on schedule with anticipated completion at the end of September 2018, the release concluded.

For more information on how ChemQuest, Inc. can serve you and your customers’ needs, click here and one of its experts will reach out to you.

Carwash to use tax breaks to expand

K&S will purchase Suds & Buds Auto Wash in Auburn, N.Y., and Apple Auto Wash in Sennett, N.Y., for $155,000 and $445,000 respectively, and then it will perform multi-million dollar renovations on the properties to upgrade the equipment and modernize them, the article continued.

K&S will receive $206,500 in financial assistance from the Cayuga County Industrial Development Agency (CCIDA), the article noted; the project was given a $184,000 sales and use tax exemption and a $22,500 mortgage recording tax exemption by the CCIDA board.

Cayuga Economic Development Agency Executive Director Tracy Verrier said the project “checks all the boxes for a project the IDA is looking for.”

“The main benefit is taking buildings that are perhaps less aesthetically pleasing now and keeping them modern so they don’t become vacant,” Verrier said of the board’s decision to support the project. “The board supports forward movement instead of backward movement.”

Christopher Kubarek, one of the owners for K&S, said the renovations will include replacing the 30-year-old equipment, purchasing new computer systems, replacing existing tunnels, upgrading the payment systems and remodeling the facilities, the article added; the tax savings will allow K&S to purchase additional equipment, such as vacuums.

The combined cost for the two renovations will total about $3.5 million, the article noted, and within three years of the renovation, K&S plans to hire 10 full-time employees between the two locations.

The renovations will begin this summer, Kubarek stated, and are scheduled to be completed by the fall, the article added; the carwashes will still operate at different capacities during the time.

K&S currently owns two locations, the first one having opened in 1977, the article noted.

“We’ve been here for 40 years and we’re going to be here for 40 more,” Kubarek said. “The city of Auburn has been great to us. We’re very excited about the project and can’t wait to continue to grow in Central New York.”

LANSDALE, Pa. — According to www.thereporteronline.com, Blue Wave Express Car Wash, located at 1246 N. Broad St., is celebrating its grand opening on June 2nd, and in honor of the event, the carwash will offer a free Ultimate Car Wash to every vehicle between 9 a.m. and 3 p.m., weather permitting.

Co-owner Anthony Perillo said, “It’s our $18 wash and we’re giving it for free because I want to get people acclimated to coming here. There is no other wash in the area that is state-of-the-art like this one, and I know once people try us, they will be back.”

Perillo is a former race fuel technician who specialized in auto detailing part-time and has long dreamed of owning his own carwash, the article continued.

Perillo and his wife, Caroline, found the decades-old and long-shuttered Major Clean carwash, in which they saw an opportunity to bring a new concept to the area, the article noted.

“The equipment was old and obsolete. There had never been any capital improvements made. The place was for sale, and I saw the potential of what we could do with it after we remodeled. It was on the main drag and had been successful for many years,” Perillo said. “Since it was already an existing carwash, the water hookups were all here. There was no land development involved. So it just made sense to purchase the property and modernize it.”

Single wash options start at $8, but there is also a Members Club that offers unlimited washes, the article noted.

There is even a wash package that comes with a 48-hour rain guarantee, the article added.

“We want to make it a more pleasant experience, not just an average carwash,” Caroline Perillo noted. “We have made it easy to pay with cash, credit, debit or gift cards. No attendants to tip, no fumbling for quarters. With 18 free vacuums, we’ll eliminate the congestion that you often find on a sunny Saturday morning at the carwash.”

“Not only are customers going to leave with a very clean, dry car, [but] they will have enjoyed an experience, a ride — not just an average car wash,” Caroline Perillo said.