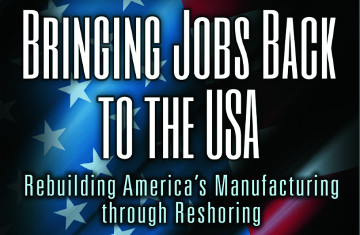 HAMILTON, Ohio — Military veterans Dave Lippert and Tim Hutzel have released a new book discussing dangers and hidden costs of offshoring, according to a press release.

Bringing Jobs Back to the USA: Rebuilding America’s Manufacturing through Reshoring tells stories of companies that have sent jobs outside the U.S., and of the negative effects experienced because of it, said the release.

Lippert and Hutzel spent three years writing the book, which examines the companies’ motivations to move these jobs, as well as the true cost of the offshoring practice unknown to these organizations, stated the release.

&ldquo;It allows us to create local jobs, stimulate the country’s economy, hire a more technically advanced workforce, and, most importantly, build the best darn caster in the world,” noted Lippert in the release.

Lippert has been president of Hamilton Caster for 19 years, which manufactures stock and custom-engineered heavy duty casters, wheels, carts and trailers, reported the release.

Hutzel has served 21 years at GE Aviation, been a professor at Miami University School of Engineering and the Farmer School of Business, and he has helped businesses succeed, explained the release.