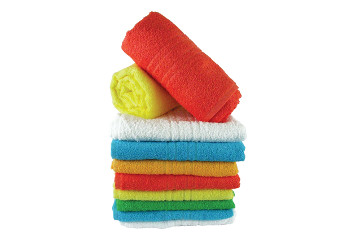 Tired of dealing with towel lint? Leave lint behind and increase longevity by following these laundering and usage steps.

Simply put, if a carwash employee isn't holding a towel while on the clock, then odds are good that he or she is goofing off. Especially in the full-serve and detailing markets, towels are important tools used in every phase of the wash process, from cleaning to drying to waxing.

Since towels will contact the surface of every vehicle that enters a wash, it is very important to put some thought into their cleaning and care. To be effective tools, all towels must be laundered correctly and cared for appropriately. Below are 11 tips provided by experts that will keep carwash towels lint-free and improve their performance.

Wash before using. New towels should be washed and dried once before they are used in a carwash, according to Becky Kube, owner of Q.B. Enterprises Inc. Even though towels may be called "lint-free," there will be some lint created during the manufacturing process. When the towels are washed and dried for the first time, this lint will be removed and captured in the dryer's lint catcher.

Launder regularly. A full-service carwash or detail shop should have a washing machine on the property, Kube stated. These machines can even be household clothes washers. All that is needed is for towels to be washed, rinsed and spun dry. Since many towels absorb better when they are a little damp, they can often be used for drying cars immediately after they are washed.

Say yes to vinegar. Gartland recommended using the vinegar as well for three reasons. First, it will dissolve hydrocarbon grease that comes from the rocker panels and car sides. Next, it will kill the growth of odor causing bacteria and make towels smell fresh. Finally, it will release lint from the towel. "It's a very inexpensive, simple washing chemical that works like magic," he said. "It works like a charm."

Don't worry about vinegar and reclaim. If vinegar kills the odor-causing bacteria in towels, how will it affect the function of a wash's water reclaim system? Kube said vinegar will not kill the bacteria used in these systems. She spoke in depth with a company that created a 100 percent reclaim system, and they stated that the bacteria will not be killed by water from towels washed using a biodegradable liquid laundry detergent and clear vinegar.

As many full-service washes have switched to microfiber towels, proper drying and usage has become more and more important. Kube said microfiber towels are a big investment. Yet owners "kill" their towels by heating them too much or by putting chemicals on them that will melt the fibers together.

Never mix old and new. When washing, Kube said new towels should never be washed with old towels. The cotton fibers, through the natural usage process, start to tear up, shred and create lint. Here, the older towels will actually leave debris or lint behind on the newer towels.

Color code to keep separate. Windows are the first thing a customer sees when he or she gets in the car and drives away. "And if the windows aren't dry and completely free of lint and streaks, [customers] make a judgment right away on the performance of the wash," Gartland said.

To avoid window streaks and smudges, Gartland said towels used for glass and windshields should never be used to wipe the body of the car. Car rocker panels can be covered in road tar, and door jambs may have silicone grease on them. If a towel used for wiping these areas is reused on glass, it will cause streaks. Color coding is an easy way to make sure the towels used on a car's body can be kept separate from window towels.

"So that's a very important decision in choosing the product because, after all, a carwash is all about drying a car when it comes out of the tunnel," Gartland said. "So if it's 50 percent less absorbent, obviously they're going to need a lot more of the product to get the car done."

Kube said there are a lot of towel rejects or seconds on the market, particularly with surgical towels. These rejects will often have holes and tears or the seams won't be completely sewn. These towels are not recommended for carwash use because they wear out quickly, and they also lint and tear while being used.

"If you buy a better quality towel, it's going to last you longer. If you pay less up front, you're just going to buy more often," Kube said. "Your cost might be … less for this particular case, but it's going to cost you as much or more in the long run because you're going to have to buy more inventory."

30 and under rising stars: Hunter Lemmond

Participate in PC&D's research
Connect with us