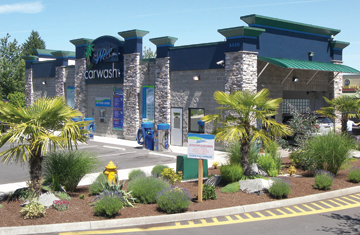 Mike Opitz is a West Point graduate, the president of the Puget Sound Car Wash Association and owner of not only The Wave Carwash and Express Detail Center but also a construction company. His degree from the academy is in mechanical engineering and the West Point experience set the foundation for his future – a keen attention to details and a knack for being a leader.

Opitz says he “had always had an interest” in the carwash business since his five years in the Army had him stationed in Anchorage, Alaska. Being a graduate of West Point, Opitz has developed a habit of being “very tidy.” Those habits applied to his car. While he was in Anchorage he frequently visited a Hanna carwash and the business piqued his interest.

After leaving the Army he started a construction company and eventually purchased a piece of land in Lacey, Washington. He knew that a carwash was the best investment – there was no carwash in Lacey – and Opitz, with his keen attention to detail, noticed the need for the residents of Lacey and noticed the gap in the market.

The Hanna name had stuck with him and while looking for carwash equipment he found Chuck Sasse, then a Hanna salesman.

“I forged a friendship with [Sasse],” Opitz said. “He’s been an integral part of all my time in the carwashing business from the very beginning.”

Sasse continued to supply The Wave with equipment as the carwash continued to add locations. Even as Sasse moved on from the manufacturer, he and Opitz remain great friends.

“Chuck would always call me and say, ‘How you doin’? What’s going well? What’s not going so well?’” Opitz said. “He was always there at our new sites’ grand opening… It’s way beyond a sales guy trying to make commission.”

“It really took off well,” Opitz said with a chuckle.

Following the success of the flagship location, which Opitz says is still the most profitable site; he built and opened three more carwashes over the next five years. He has also recently made an offer on another site which, if all goes according to plan, would be home to a fifth Wave Carwash tunnel in 2015.

Despite building throughout western Washington, Opitz’s carwash journey would bring him back to the original Olympia site, where, in July of this year, he made the decision to open an Express Detail Center. Opitz said the decision was an easy one to make based on customer requests. Many of them, he said, wanted a more thorough tire cleaning or a hand-dry to accompany their wash. Opitz took these requests a step further and decided to utilize a small parcel of land adjacent to the first carwash he built for the detail center.

Opitz was pleasantly surprised at the result.

“We did not market it initially, we wanted to do a soft opening. Work all the bugs out; make sure we were providing a very high quality experience for customers.” Opitz explained. “The first month we were open we did 520 cars with a $45 ticket average.”

Opitz credits detailer, and PC&D detail editor, Bud Abraham for helping him get the express detail center off the ground and make sure that he was doing it right.

“[Abraham] was my point man in helping me set this all up,” Opitz said. “I have to say, when I bought my equipment from him, he came up and helped us develop our service packages and he helped train our new employees for the first week. Bud did a phenomenal job. He’s the Bobby Knight of the detailing world.”

Opitz explains the Bobby Knight comparison, saying, while Abraham’s training of the new Wave Express Detail Center staff was “like boot camp” – something Opitz knows a thing or two about – the employees respected him. Abraham helped Opitz design The Wave Carwash Express Detail Center operations manual which is a step-by-step guide for helping employees to do the job – and do the job right. The training includes practice runs on vehicles. During those practice runs the employee is timed and graded on their performance – a sort of callback to the type of training Opitz went through while attending West Point.

“I want to recognize Bud Abraham as doing an amazing job for us,” Opitz reiterated. “I couldn’t have done it without him.”

“I tell everybody we’re not a detail center; we are an express detail center,” Opitz reiterates. “You don’t have to drop your car off for two days and it’s not going to cost you two to three-hundred dollars. There’s no inconvenience.”

At The Wave Carwash Express Detail Center Opitz offers some additional amenities, such as complimentary coffee, water and Wi-Fi, to appeal to the sales-type-guys who often have clients in their vehicles.

“Those are the customers I cater to. Where he’s got his laptop, comes right in … He can keep working on his laptop with the free Wi-Fi and a cup of coffee and get his car all cleaned up and he’s back on his way in thirty minutes,” Opitz said.

The Wave Express Detail Center is the latest success for Opitz. He credits West Point for giving him the tools to be successful – and he tried to pass on those values to his employees. He often asks them what they want out of life and hopes that he is giving them the opportunity to begin that journey.

“I think the biggest thing for me, and my whole company philosophy, is I want to help our people grow. I want to help our people achieve their goals and dreams,” Opitz said. “That’s the kind of people you want working for you – those that are striving to move up in life and get better. I consider it part of my job is to help them move up and get better. Help them improve their quality of life.”

Yet, like any good businessman, Opitz still has goals. He says he plans on opening five more carwashes in western Washington within the next ten years – making ten total. He has not yet decided whether or not he will open another Wave Express Detail Center, although if the flagship turns out to be successful he already has a site in mind.

But if the ambition Opitz has shown throughout his career, first as a soldier and now as the owner of a construction company, carwash chain and express detail center, is any indication – he will not be content stopping at ten.