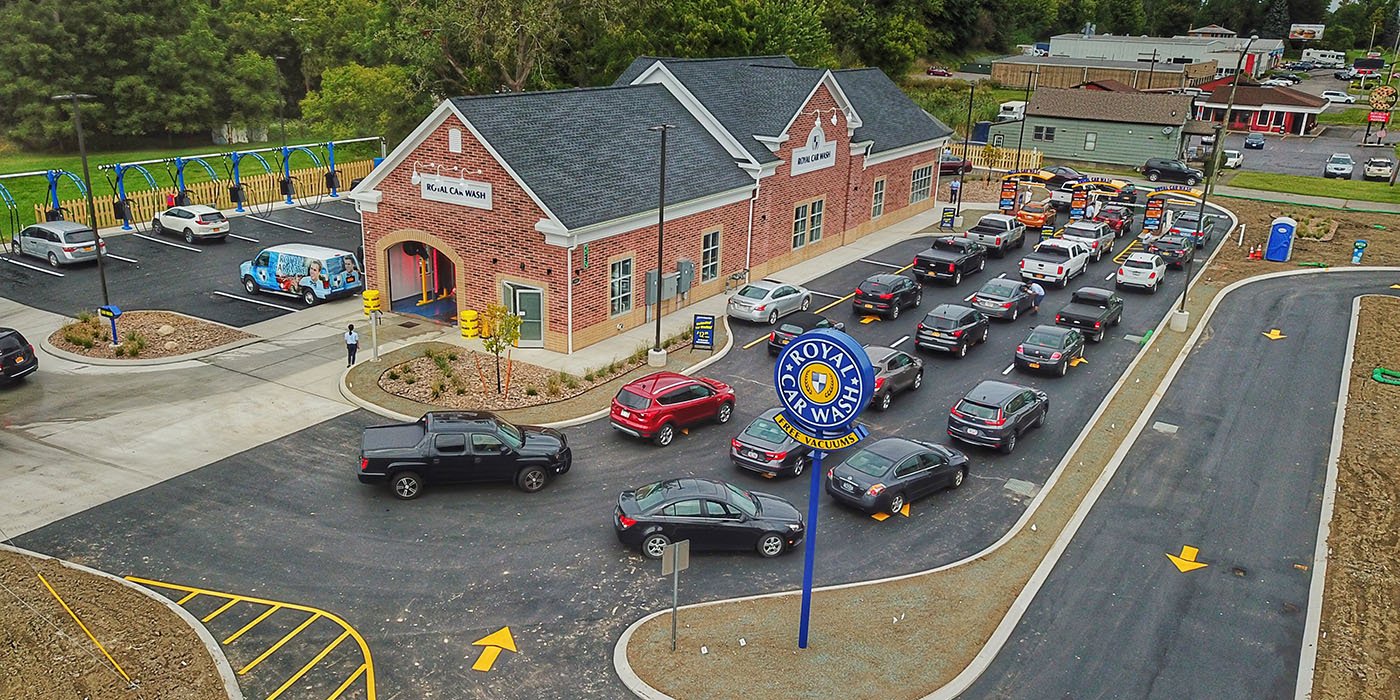 Over the centuries, the pursuit of the American dream has inspired millions of people around the world to immigrate to the U.S. Driven by a need to succeed, many found and built lifelong careers or became entrepreneurs and created a family legacy. So it was with the Daniele family, who in two generations has built a company encompassing a wide variety of businesses, including Royal Car Wash, based in Rochester, New York.

Danny and Anthony Daniele, co-owners of Royal Car Wash, are the sons of two Italian immigrants who arrived in the U.S. when they were young and had no formal American education. Their father, Mario, operated a pizza shoppe when the two were young, and Mario eventually opened multiple Italian restaurants and banquet facilities in Rochester.

“All my brother and I knew growing up from the age of eight and up was working in the restaurant business and learning the importance of hospitality and treating people respectfully,” Danny Daniele says.

Danny and Anthony worked in the family restaurant business for over 25 years before the Daniele family also decided to enter into real estate development. In this new field, they built and leased structures, purchased and expanded a marina, and bought and operated a franchise hotel location.

Like any developer, their eyes were constantly on the lookout for the next big project. In the late 2000s, the family was eyeing a three-quarter-acre corner lot that saw 60,000-plus cars passing per day. As much as they wanted it, the lot seemed a bit small for any of the ideas they had.

Then one day, someone suddenly pitched the family a laser wash system, hoping to get them to buy. “My father was intrigued and asked my brother and I our thoughts. We loved the idea of a carwash at that location, but neither of us liked the slow pace of [an in-bay automatic] type,” Daniele notes.

After doing some research and proformas into the carwash market, the Daniele family was sold on the idea and was rearing to get their project going — only to be slowed down by the local approval and permitting process.

“The approval process in Brighton, New York, is perhaps one of the most antiquated, exaggerated and slow-moving cultures we had ever worked with before,” Daniele recalls. “It took us almost three excruciating years to attain town approvals and a building permit.”

The family finally opened the first Royal Car Wash in 2011, but the results were far from what they had expected. “Ironically, after all that work, once we opened, we only averaged about 75 to 100 cars per day for the first few months,” Daniele remarks. “We thought it was the worst investment we’d ever made in the history of our family.”

Despite this slow start, the Danieles continued to push through — and their approach to branding and operating eventually bore results.

Some people who build carwashes start with a theme or a concept. Not so for the Danieles. Their approach was based more on what past experience had taught them. For instance, when choosing their brand name, they developed it based on signage restrictions, which determined for them how long the name would be and how many letters would be in it.

“We have learned in our years that every town board has restrictions on sign sizes, and the smaller your name, the larger the letters. So, we went with Royal Car Wash,” Daniele explains.

With a name comes a logo, and the first Royal Car Wash logo resembled a Rolex watch — though not for long. After a few years, Rolex USA contacted the company and threatened to sue if they did not change the logo, Daniele recalls. Since the company only had one location and does logo creation in-house, it ended up being a quick fix. In fact, Daniele notes, the threatened suit turned out to be a blessing in disguise, because the Royal Car Wash staff found the new logo much better. “We are thankful to whomever blew us in,” Daniele quips.

Next, the Danieles planned out how to make their carwash unique. Part of this process focused purely on aesthetics — since, despite what we might like to believe, looks do matter — while the other part was based on service.

“When we began to design our brand, or any new brand for that matter, we looked at what would help us stand apart from the others out there already washing cars. We often take our inspirations from our years in the restaurant business,” Daniele explains.

To that end, the Danieles typically start with planning out the uniforms: crisp, clean shirts with a bowtie. Next, they look at landscaping in terms of building presence and ease of operations for customers.

Finally, in Royal Car Wash’s case, they conducted surveys to find the top three things people would change about current carwashes, including:

Royal Car Wash’s internal, cultural model is “whatever it takes” to make the customer happy, so the company took its survey results to heart and instituted policies of no tipping, no pushy salespeople and fast service.

In addition, Royal Car Wash focuses on grooming its employees to be friendly, model representatives of the brand. In fact, the carwash took a phrase from the Ritz Carlton as another internal motto, where it refers to its staff as “ladies and gentlemen serving ladies and gentlemen.”

What does this look like in the end? Daniele explains, “Our staff has very little interaction with our customers. Therefore, we really educate the importance of non-verbal communication. Every customer receives a smile. Each time a driver makes eye contact with any of our staff, we are all instructed to show a sincere smile. No words, no talking — just a friendly, warm smile. And believe it or not, our most popular customer comment is, ‘Your staff is so friendly.’”

Long may it reign

Although the initial location’s numbers started out low, each passing month brought a slow but steady increase in volume. After two years, however, the family finally realized the potential of the carwash business. As such, they opened a second location about 10 minutes away in Henrietta, New York (and this location only took 90 days to receive approvals and building permits).

The following year, the Danieles opened their third location, and they continued in that vein for some time, opening one new location per year. Now, however, Royal Car Wash opens two to three locations a year, and when it does host a grand opening, it does so in style.

“We have learned how to open with a bang, often signing up over 2,500 club accounts within the first 90 days,” Daniele notes.

For 2020, the company was on track to open four carwashes, but due to the coronavirus impact, it may fall short by one this year. However, this does not diminish the progress the company has already made. Today, Royal Car Wash has a total of 12 locations: nine in Rochester and three in Buffalo, New York. However, the family isn’t stopping there.

“We are on track to have 20 locations in upstate New York prior to 2025, and we have no intentions of slowing down after that,” Daniele proclaims.

But, the excitement of growth isn’t just about the numbers for the Danieles — it’s about the people too.

“One of the most rewarding parts of growing the carwash has been working with our team,” Daniele states. “We have guys and girls that started in high school and now run their own sites or run their own territory. To see their growth and be a part of their mentoring towards leadership is amazing and addictive.”

Daniele notes that the team often spends a good portion of their general meetings focusing on leadership, self-awareness, personal emotions and tools to help build up their reactions and decision-making protocols. The company also developed the Royal University online leadership course, which employees can utilize to grow within the company. Every year, Royal Car Wash adds new categories to the course and focuses on topics that most people going through the wash don’t even realize matter to the business.

The Danieles also attribute much of the company’s success to two team members in particular: Rick Carosa, the company’s acting president, who has been with the team for about five years and has 35 years of leading carwash industry experience, and Phil Schron, vice president of culture and training, who previously worked with the Danieles in the restaurant industry and has been integral in shaping and spearheading Royal Car Wash’s culture.

Of course, Daniele says that while the company is staying diligent in its growth process, it is also staying true to local demographics and population guidelines and trying not to hurt other competitors.

“Nobody wins when you do [that],” he asserts. “Growth is exciting, and it is easy to get carried away with the desire to just grow. The hardest thing is saying no to a new potential site.”

Success is not just based on growth, however, but adaptability, and that fact has been proven no more so than in recent times in response to the coronavirus. Those who adapt the quickest and best will be well-positioned for the future.

“Our ability to adapt and overcome obstacles is crucial to our success,” Daniele concludes. “We are so fortunate to have an amazing team of leaders within our organization that the future is so exciting, and we can’t wait to see how far we go from here.”

The 2020 Top 50 List of Conveyor Carwashes
Connect with us