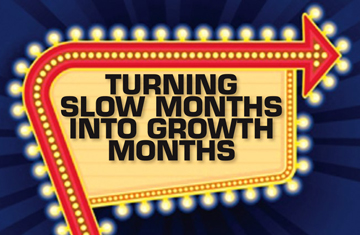 How to bring in more cars during the slower times of the year.

While the summer months bring about fun in the sun, vacations and outdoor parties, they can often mean not-so-fun times for carwash owners. The season, and most notably the month of August, are notoriously known as slow times. According to Steve Gaudreau, president of BRINK RESULTS, and a 25-year carwash veteran and author of Creating Exceptional Managers and So You Want to Own a Carwash, people feel more comfortable washing their cars at home during the summer (with the exception of the West Coast). Along with at-home carwashes, people are also away on vacation, or simply not getting their cars dirty and those reasons are hurting carwashes. What’s worse is that following the summer, the fall can be a slow time of year, too. So, what can be done about it? Without the power to change the traits of the season, it seems as if some slick, new, savvy marketing campaigns are needed. Ray Kroc, who bought the McDonald’s chain in 1961, and turned it into one of the most popular fast food chains in the world, credited good, and daring marketing with his success. We’re not in the hamburger business, he once said, we’re in the show business. Kroc also said success comes from taking risks. If you’re not a risk taker, he said, you should get out of business.”  This is not a time to sit idly by and wait for the summer months to be over. It’s instead a time to act smart and turn the slow times into profitable ones. The following are four marketing campaigns to try that should help attract and bring in irresolute carwashers.

Once regarded as a special for older people, it’s not the case anymore. Everyone of every age likes a special deal. And, everyone likes one that doesn’t have a lot of strings attached. Simply by asking a customer to come in during a certain timeframe works, according to Gaudreau. Have the early bird special run from 8 a.m. to 10 a.m., or during slower times of the day, and discount a particular service. If a full-service wash is $12, Gaudreau said, advertise it for $9.99. Put this special on the carwash’s sign, and on all social media platforms.  Also, even if you decide to do this during a “slow” month, try running it during busy times of the year. It might be something that could be beneficial all of the time.

Bobby Willis, owner of the Cool Wave Car Wash chain in Virginia, said because he knows August is one of his slowest months, he has to take action. Over the years he has tried things such as LivingSocial and free vacuums, but eventually he found a tactic that works best. “We offer a free carwash to anyone who ‘likes’ us on our Facebook page,” Willis said. “Once they like us, they get a code that they can bring to the carwash. Our Facebook fans love it, they have been calling us and writing on Facebook how much they love the free wash. It’s generated a lot of buzz.” Also on overcast days they will offer up a free carwash to Facebook fans.

Willis said they’re using their social mediums a lot lately and hired a marketing person who is focused on Facebook, Twitter and Pinterest. We promote the idea to like our Facebook page on the back of our receipts and on our other social media sites, he said.

The term happy hour is part of our lexicon and has a happy connotation. Plus, seeing the word “happy” in any kind of promotion instantly sets the mind in a positive place. Or as Journalist A.J. Rathbun, who writes for Seattle Magazine wrote in an article entitled, The True Meaning of "Happy Hour, “the right happy hour is a beacon of light and laughter.”

And, while it usually means a discounted drink or appetizer at a restaurant, it can apply to a carwash as well, said Matthew K. Hord, director of marketing for BRINK RESULTS.  He suggested giving a 25 percent discount during the happy hour time on perhaps Tuesdays and Thursdays. But, be sure to pick a time when you’re well staffed, he added, as you don’t want to have an influx of customers and then make them wait in line.

4.  Target the fundraiser and charity carwashes

It’s the time of the year when groups, churches and clubs try and raise money by washing cars with buckets and hoses. Type the words “car wash fundraiser” into Google News and over 8,000 sites appear. But, as we in the commercial carwashing industry know, these innocent little carwashing events are bad for the environment, and ultimately bad for our type of business.

Thankfully, some states, such as the state of Washington and cities are banning parking lot carwashes. In fact, just recently, Stephanie Harlan, mayor of Capitola, NM, made a move to dissuade fundraiser carwashes. The city is now working to ban them altogether.

Willis said they target these types of carwashes this time of year. “We have a lot in our area,” he said. “We will go right up to the people hosting the carwash and give them my business card or a flyer and tell them that they can host a fundraiser at one of my carwashes.” Willis said they can promote that his wash is giving away carwashes for charity and will allow the charitable group to keep donations and tips. “It at least gets them off of the streets. And, it’s both a measure of good will and it’s hopefully changing the minds of the people in the charity,” he said.