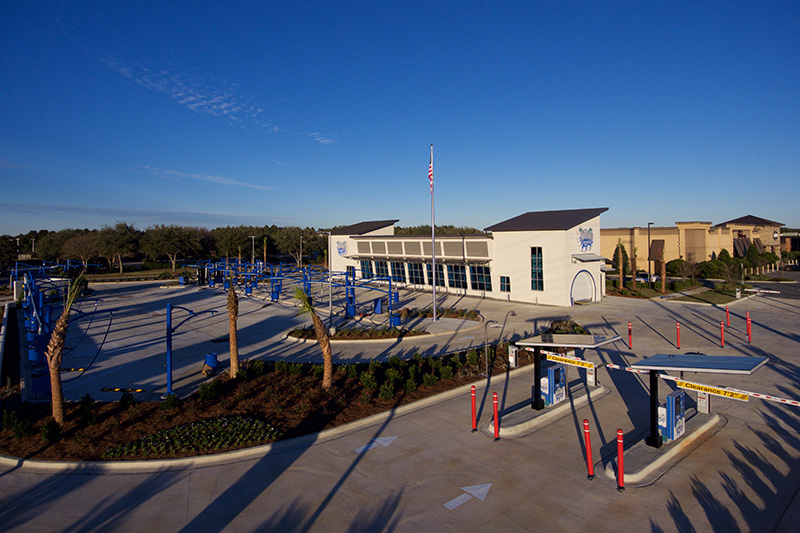 This wash was an “ottomatic” success.

Florida evokes images of pristine white beaches, teal waters and theme parks. Otto’s Express Car Wash just opened on Jan. 7, 2019 in Destin, Florida, and customers are already hailing it as the “Disneyworld of carwashes.” In an area where carwashes are few and far between, especially of the express exterior variety, the Destin community is flocking to this carwash for its unique experience and high-quality product.

A need for clean

As a native of Indianapolis, Todd Garey, co-owner of Otto’s Express Car Wash, grew up identifying professional carwashing with Mike’s Carwash. His parents patronized the chain, as did he and his own children later on. To him, Mike’s was the quintessential “big city carwash.”

In fact, Garey was so impressed by this leading carwash chain that around 15 years ago, he even called the company up regarding franchise opportunities outside of its Indiana/Ohio region. And, that is where the story of Otto’s Express Car Wash begins.

Garey had been taking his family down to Destin, Florida, for 18 years before finally moving there in 2015. Destin, with a population between 12,000 and 14,000 people, did not have the sort of carwash Garey was used to finding in Mike’s. However, tourism being the lifeblood of the city, Destin’s beaches attract nearly 4.2 million visitors a year, according to Garey, and the neighboring county attracts a further 4.2 million visitors.

“So, we have 8.4 million people that come here a year. You can put as many carwash businesses as you want here,” Garey asserts. “I think there’s enough business for everybody.”

He found the numbers were more than enough to justify having a “big city carwash” in town, especially since so many of the visitors, who hail from large metropolises themselves and also come to Destin in their cars, would be used to patronizing such a wash.

So, after moving to Destin, Garey decided to build a carwash to serve a community need. Although his original idea to do a joint venture with Mike’s Carwash didn’t pan out, Garey didn’t let that stop him. He decided to build his own carwash, which also gave him an opportunity to go into business with his son Jon, co-owner of Otto’s Express.

“Jon and I wanted to do something together. I’ve been in business for myself since I was 26, and it just made sense that this was something we could do together, and I could teach him the business world. It wasn’t without challenge. We just felt like there was a need,” Garey explains.

Garey started on his entrepreneurial track by building a temporary help company and selling it three and a half years later. Afterwards, he moved into the telecommunications industry and then into the shipping industry, in which he spent the most time.

Thus, with no prior experience in carwashing, Garey and Jon set out to do their due diligence in finding the right equipment manufacturer for them. Eventually, they found a distributor who walked them through every step of the process, offering suggestions to help make their carwash become that much more unique, for which they are grateful.

One of those unique elements, their distributor told them, was just as simple as the name and logo the Gareys came up with. In an industry saturated with soaps, suds, bubbles and shines, the Gareys put a new spin on the name. Of course, the name begs the question: Who’s Otto?

As Garey tells it, “Everybody asks if I’m Otto or Jon’s Otto. We’re like, no — it’s a play on words.” “Otto” plays on the word “automobile.” In fact, when Garey’s wife, Ellen, designed the logo, she made “Otto’s” look like a Volkswagen bug. The logo also incorporates local elements of Destin — splashing water and palm trees — to reaffirm its place in the local community.

From outlining their plans in 2016 to now, the Gareys have worked hard for three long years to get their dream carwash up and running. However, such a wait is difficult for anyone, especially potential customers who are not aware of everything that has to be done to build a carwash from the ground up and how long it takes. So, to help ease some of the tension of waiting, the Gareys decided to give Destin residents snapshots of their progress along the way.

In a unique way of doing so, they droned the project. In other words, the Gareys took aerial drone photographs of the site from groundbreaking to its completion and posted the photos on the company’s website and social media, denoting what was happening. According to Garey, response was positive to the project.

“People have been saying, ‘We’ve been watching your project from breaking ground. We’ve been waiting for you to open. We’re glad that you’re here.’ It’s refreshing to know that the locals have really embraced this,” Garey says.

Of course, alongside the usual challenges that come with opening a wash, Otto’s Express experienced another sort of hardship in October 2018 while preparing to open: the force of Hurricane Michael. While the hurricane itself created little impact directly on the carwash itself, the region just east of it was slammed.

As a result, Garey, his family and the Otto’s Express employees jumped into the fray to help. They loaded up their vehicles with supplies and delivered them to relief shelters and families in need. The company even posted an article on its website and Facebook page with helpful links to other organizations that could help those affected by the disaster.

“Otto’s Express and its employees were very engaged in the hurricane relief effort,” Garey recalls. “We were helping the churches and loading up big trailers full of stuff. We did what we could.”

While Garey feels that the equipment in the tunnel itself is what sets this wash apart — the same equipment is not to be found in a carwash for miles around — there are other ways in which Garey sought to make this a carwash both residents and visitors would seek out.

Day or night, the carwash is a beacon to those on the highway. Sporting a modern façade — complete with rows of windows along the tunnel to ease claustrophobia — and eye-catching blue vacuum booms, this carwash is the very picture of state-of-the-art.

The Gareys also erected a large flagpole on the property in recognition of the significant military presence in the area, courtesy of Fort Walton. At night, the blue, purple and green LEDs that wrap around the upper part of the building and the blue lights that illuminate the windows make the carwash look like a work of art. “It lights up great at night,” Garey confirms.

Once customers exit the 130-foot tunnel, which also provides an LED light show during the premium wash package, they can then use the 19 free vacuum drops and two high-tech mat washers that will not only clean the mats but also dry them.

“We spared no expense on this place,” Garey states. “We have music that’s piped out so that when people are vacuuming their cars, kids are out there dancing on the sidewalks. The kids [also] love helping their parents with the mat washers. It’s something that they can do together, and it’s safe.”

The Gareys also took the environment into account. Not only do they have a water reclaim system, but they also installed a metal roof to reflect the sun and put in solar energy collectors.

“We have solar built into the building,” Garey explains. “Architecturally, you wouldn’t even know it’s there. And so, that’s offsetting a lot of the electrical bill.”

Furthermore, to keep the lot as comfortable as possible in the subtropical climate, the Gareys opted for 100 percent concrete on the lot as opposed to blacktop, since there’s a 10 to 15-degree temperature difference between the two, Garey says. Coupled with the canopies over the vacuums, the chore of vacuuming in the heat will not be as strenuous for customers. In addition, the vacuum stations are on a 4-degree incline so that when customers with pickup trucks are vacuuming the cabs, excess water drains out of the beds.

All of these innovations together with the Gareys’ resolve to hire the right employees and stay invested in the business have contributed to this carwash’s early success.

“Support from the community has been overwhelming,” Garey says. “We enjoy meeting new people every day and are thrilled to have made our dreams a reality while also providing a new and much-needed service.”

While the Gareys have only the one location now, they already have the land set aside for their second location in nearby Santa Rosa Beach. However, as far as competition goes, the Gareys are more than happy to welcome other carwashes to the neighborhood.

“We’ve been told that … I guess from an expectation-level standpoint, we’ve helped elevate what might take place in the future. We wanted to make sure that when we built this in Destin that we set a standard, because we want other businesses to come into Destin and also create a wonderful experience by [constructing] a great building and a great structure, so that it’s representing our community the way we want it to be represented,” Garey concludes. 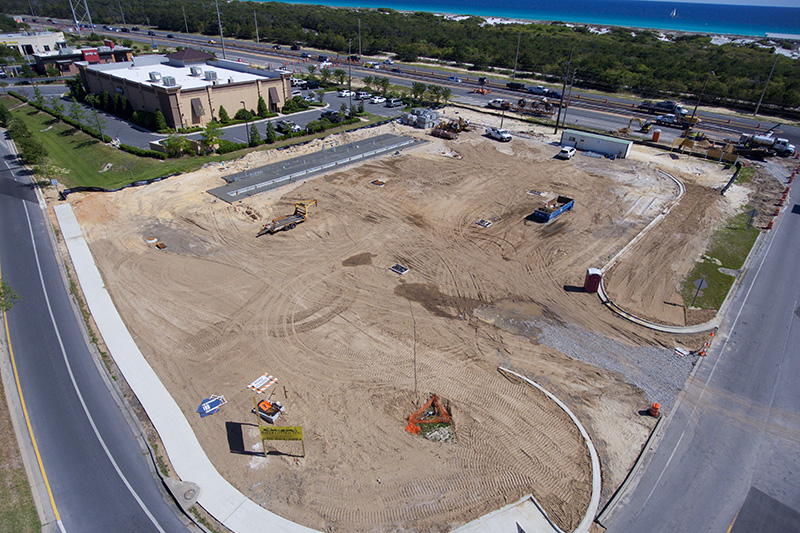 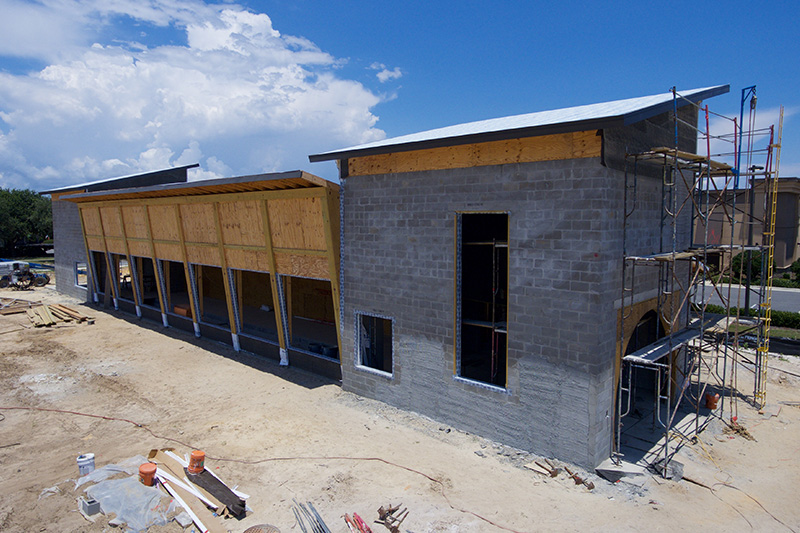 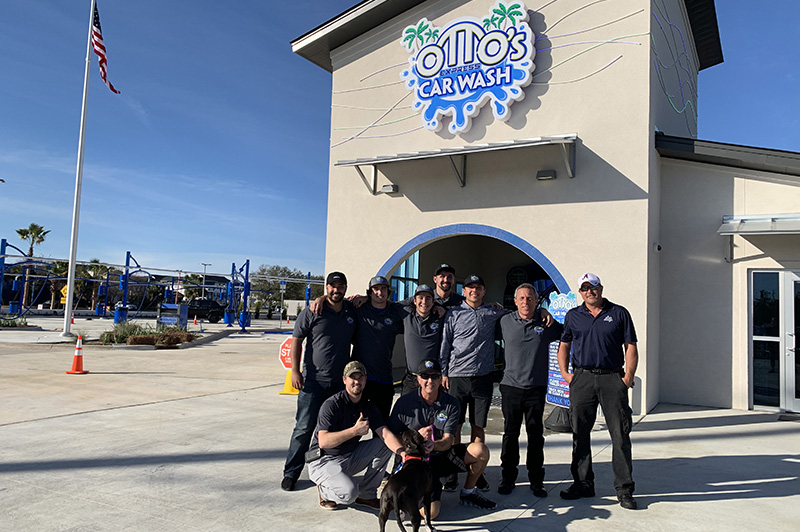 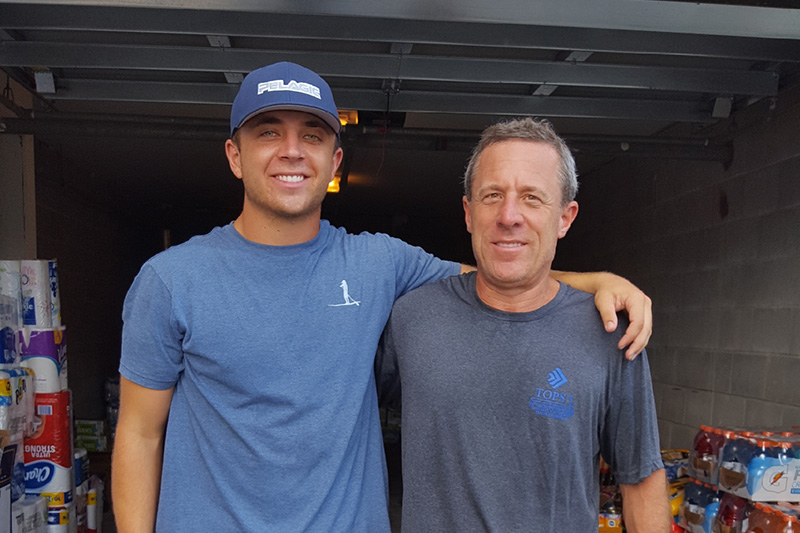 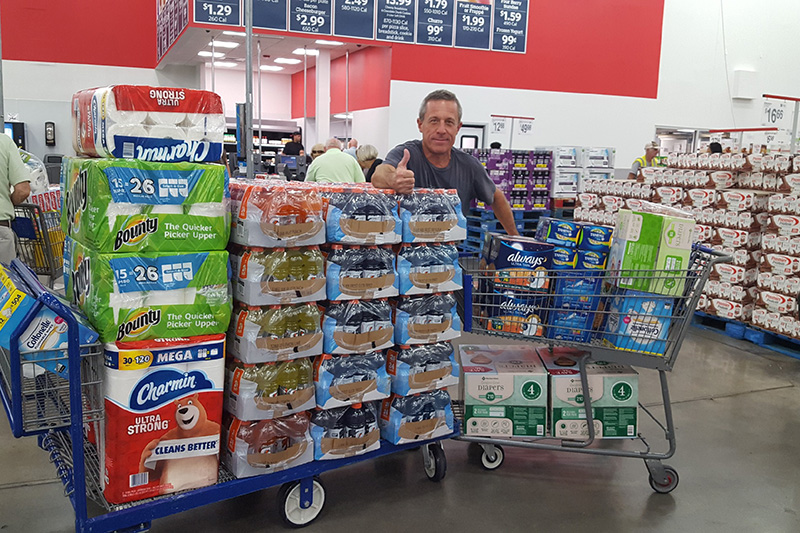 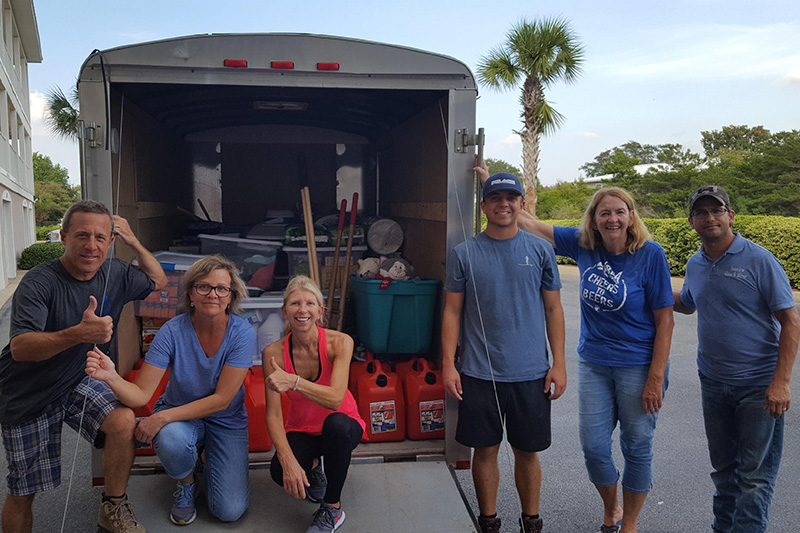 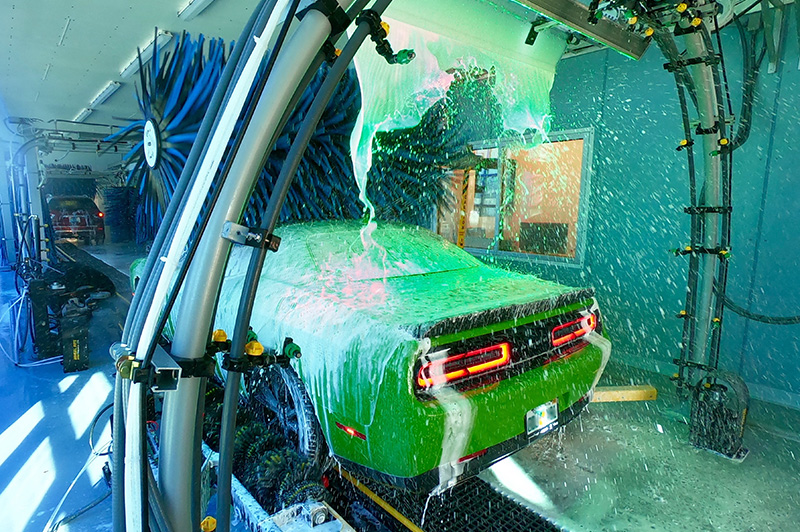 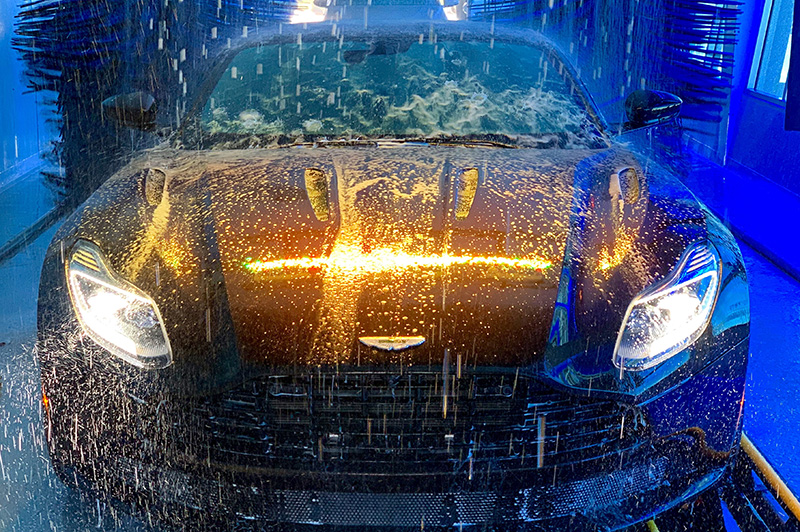 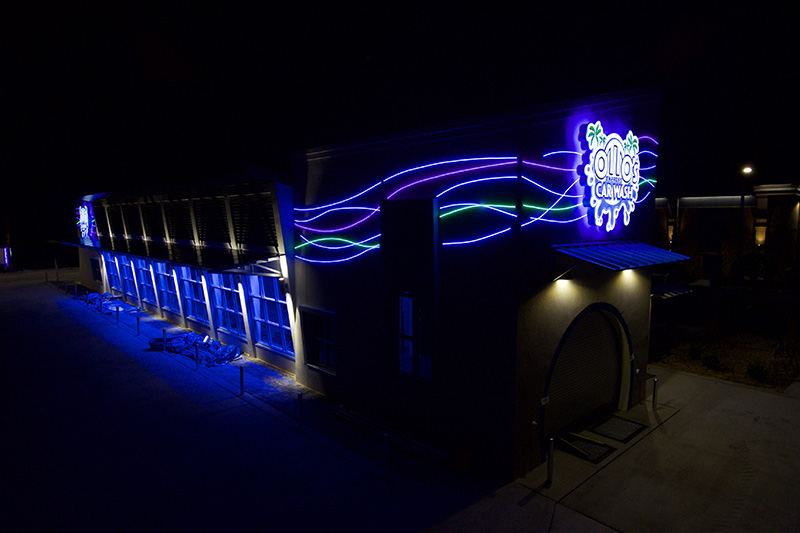