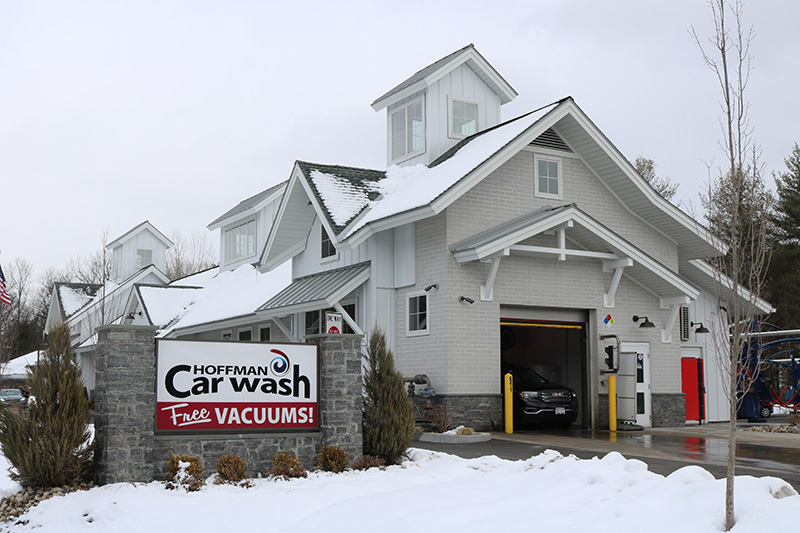 Staying ahead of the innovation game.

When you’ve been in the carwashing business as long as the Hoffman family has, you know you have to keep on top of the latest innovations in order to not only survive but also to grow.

Now, these aren’t the futuristic, humanoid robots we often see in sci-fi movies. Rather, like many of today’s robots, these are machines integrated into the carwash. So, what makes these robots any different from ordinary carwash machines?

Tom Hoffman Jr., CEO of Hoffman Car Wash & Jiffy Lube, will be the first to tell you that, as far as the industry goes, in-bay automatics have the most automation in terms of using robots without humans cleaning the car. However, what Hoffman Car Wash has done is add robots to the conveyor carwash for a more thorough cleaning.

But, what led the Hoffmans to develop this technology? Well, it certainly didn’t just hit them like lightning, but lightning did have its part to play back in the day.

In the early 1960s, Hoffman’s father — Tom Hoffman Sr. — was a professional bowler, and Hoffman’s grandfather owned a bowling alley. One day, a carwash salesman visited one of Hoffman’s cousins, which ended up getting both Hoffman’s father and grandfather into the carwash business. Tom Sr. and his wife, Carole, opened the first Hoffman Car Wash as a self-serve in 1965. As it happened, the bowling alley was struck by lightning six months after the carwash opening, and in a (literal) flash, the Hoffmans were firmly entrenched in the carwash industry.

Over the years, the Hoffmans continued to open other carwash locations. Their first conveyor carwash opened in 1968. Today, Hoffman Car Wash boasts 21 carwashes of varying formats — self-serve, full service and exterior. In addition, the company became a Jiffy Lube franchisee in 1996 and bought all seven standalone stores in the Albany, New York-area at the time, all of which they closed in order to build brand new ones at their carwash locations. Today, the company has nine Jiffy Lube locations. Four of these locations — the ones in Clifton Park, Saratoga Springs, Kingston and the Village of Colonie — are the top four busiest Jiffy Lubes out of the nation’s 2,000 stores, according to Hoffman.

Of entering the Jiffy Lube franchise, Hoffman notes, “It taught us that having bigger properties with multiple profit centers on them is attractive to customers.” So, of course, the Hoffmans didn’t stop there.

In 2013, Hoffman Car Wash also added its first J.D. Byrider franchise — a small, used car dealership that helps those without good credit not only purchase a car but also repair their credit quickly as they pay off the loan.

Today, running the company is still a family affair. Tom Sr. and Carole are still very active in the business, Hoffman says, with his mother in the office and his father, as Hoffman puts it, running around the locations “shaking hands, kissing babies and watching quality like a hawk.” Hoffman’s sisters, Carrie and Paige, are also co-owners in the business while Paige’s husband, Walt Hartl, is the director of training for the entire organization.

Hoffman was a tinkerer as a child and then got into amateur software programming in his high school days, though he went on to pursue a banking insurance and real estate degree in college. Still, he was interested in programming, and at the time, programmable logic controllers were the new thing. So, Hoffman figured out how to use them by reading the manual, and he took classes to find out how to program them. Afterwards, the company began building its own electrical controls and control systems to run the carwashes, and Hoffman became its tech guy.

Hoffman can pinpoint the exact moment of inspiration for the robotic innovations they’ve been implementing at their carwashes, however. It was in 2014, as he was driving along Interstate 87 listening to the news on the radio, that Hoffman heard about Governor Andrew Cuomo’s $15 per hour minimum wage initiatives. As Hoffman recounts, “Governor Cuomo started his campaign to drive our prices up, which would hurt our customers’ ability to afford a carwash and threaten the company. He was pushing to mess with the free market and told us we needed to automate to survive.”

So, the Hoffmans took him at his word and started to automate. They installed their first robot at their Queensbury location on their exterior conveyor using an in-bay automatic high-pressure unit to eliminate the need to prep cars.

“It worked really well,” Hoffman explains. “Next, we thought we could improve cleaning by developing a following robotic ‘wrap-around’ brush and high-pressure following prep unit.”

It was this new wrap-around brush that the Hoffmans installed at their new Saratoga Springs location. “The brush unit is a grill brush,” Hoffman educates. “It can clean the side of the vehicle, and it can follow and clean the back end of the vehicle better than any equipment available in our industry.”

In other words, the robot the Hoffmans developed can spin the “wrap” like a grill brush to give it more contact time on the front of the car to remove bugs. The robot is designed to move forward with the vehicle for about 10 feet while doing so. Furthermore, these brushes can also clean the sides and back of a car, if chosen. At the Saratoga Springs location, one brush robot is dedicated to washing the front and side of the vehicle while another one is dedicated to the side and back.

This technology eliminates the need for prep work to scrub the back of the vehicle, which has been an industry standard in carwashes (especially in the Northeast, Hoffman says) that run at high productions, because standard wraps have a difficult time making contact with the back of the vehicle. This is especially the case with the backs of SUVs and spoilers, but the new robots allow even those surface challenges to be cleaned better.

Hoffman Car Wash also developed a following wheel blaster with a zero-degree rotating nozzle that follows the vehicle for six feet in order to improve the cleaning of brake dust. The new location also boasts a company-designed and -built conveyor, chemical mixing station as well as high-pressure pumping systems.

Currently, the company is developing a following prepping unit to replace high-pressure prepping, and prototypes are in place at some of their locations.

Other firsts for the company at its newest carwash were the use of RFID tags for its unlimited washing program, offering free vacuums and installing anti-collision equipment (this carwash was actually one of the early test facilities for the lattermost equipment).

Given how much development has gone on with this company, the question now is: Are there any plans to sell the equipment in the future?

“I’ve always sold equipment to friends in the industry, but not very aggressively,” Hoffman says. “We’re going to create an equipment division and get a little more active in selling the equipment. We tend to build it heavy-duty, and the maintenance guys are making it.”

If this talk about robots and automation has you thinking that Hoffman Car Wash is trying to eliminate the human factor from the carwashing equation, you couldn’t be more wrong.

As a whole, Hoffman Car Wash employs over 750 people, and the company continually invests in them. While the company’s locations include every type of carwash, most of this labor is, of course, found in the full service carwashes.

“Managing a full service carwash is more challenging [than other types] because there are more employees. Most managers have been promoted from within. The managers that are better adapted to working with young people and mentoring them have been the ones that managed the full-serve locations,” Hoffman elucidates.

The company even has management training that the staff will undergo in a formal class for seven to eight weeks in a row, and upon completion, attendees will even receive a diploma. Education outside the carwash is also important to the company, as it offers scholarships for employees to attend college.

But the people inside the company aren’t the only ones who have had an impact on Hoffman Car Wash. Another reason Hoffman says that the family has been so successful at managing several different types of carwashes is just by talking with other carwash and Jiffy Lube owners.

“Idea sharing from other successful operators is one of our secrets to success. Sharing and being willing to share is one of the most valuable lessons my parents instilled in me and our company,” Hoffman notes.

Much of this idea sharing is achieved through association memberships, such as the International Carwash Association and the New York State Car Wash Association, both of which Hoffman is a part.

Hoffman also takes part in a group of about 20 other carwashes from around the world that meets twice a year in order to exchange ideas, which he affirms has been an incredible experience.

“My passion is growing our company and providing the people I work with greater opportunities,” Hoffman states. “We also love developing new carwash automation equipment to improve cleaning.”

First, he notes that landscaping is a relatively inexpensive way to invest in and market your carwash but that it is certainly a head-turner. Hoffman says customers consistently compliment the company’s carwashes on their attractive sites.

Second, Hoffman avows, “Developing an unlimited wash program has been the best thing we’ve done over the last 10 years to help drive sales and profit up as our national economy has accepted recurring services. We have provided our customers a way to more frequently wash their vehicles at our location at a lower cost per visit, [and] at the same time, we have rising sales and profits.”

Hoffman claims that, not only has implementing the program increased customer loyalty, but the unlimited wash plans and discounted wash cards they use represent 80 percent of the company’s revenue.

In the end, for Hoffman, what’s of utmost importance is making sure a customer has a positive experience.

“We spend an enormous amount of capital reinvesting in our locations to deliver quality and value,” Hoffman concludes. “We have a company with excellent people who provide our customers a quality product.” 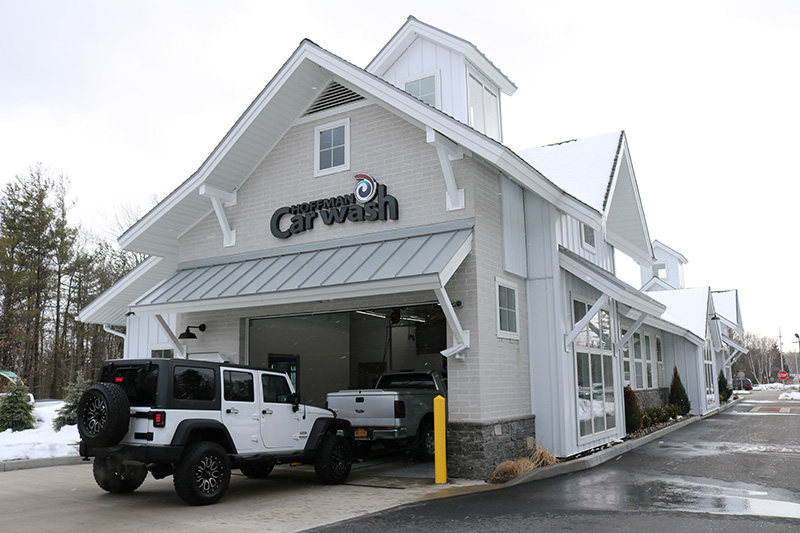 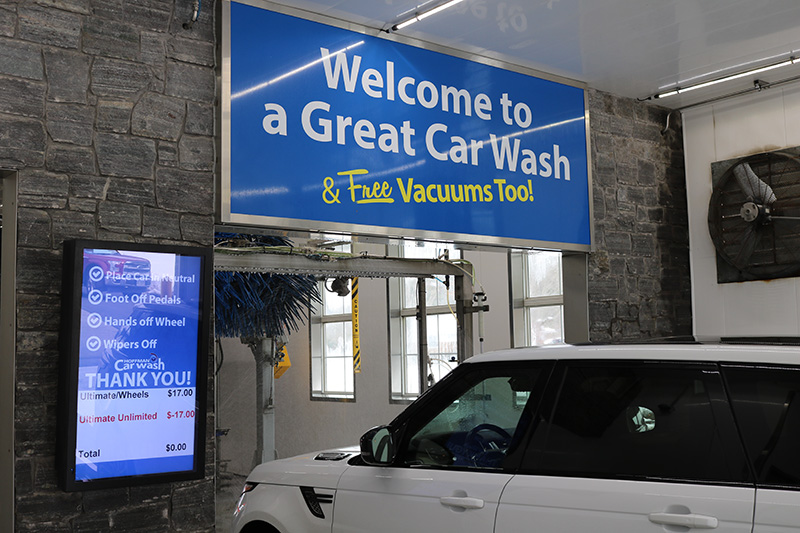 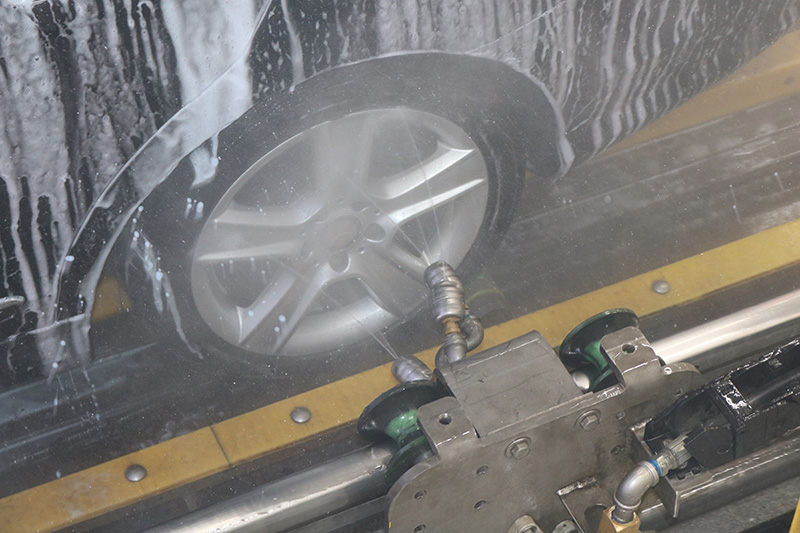 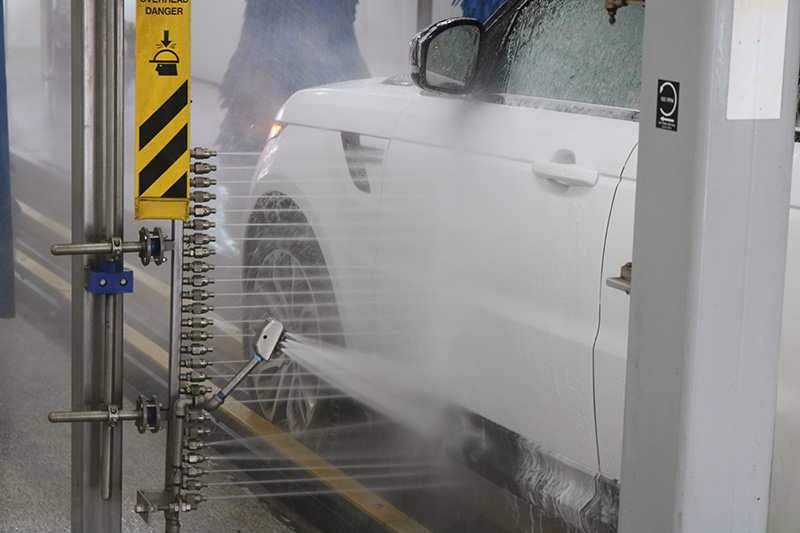 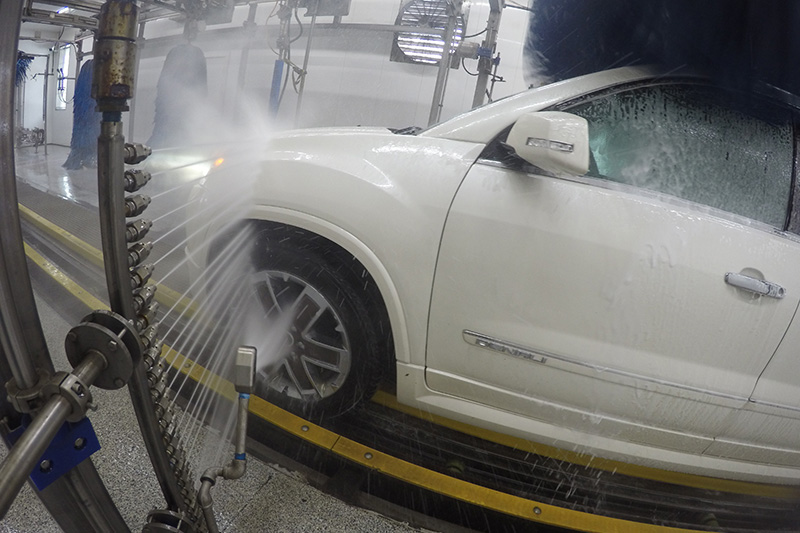 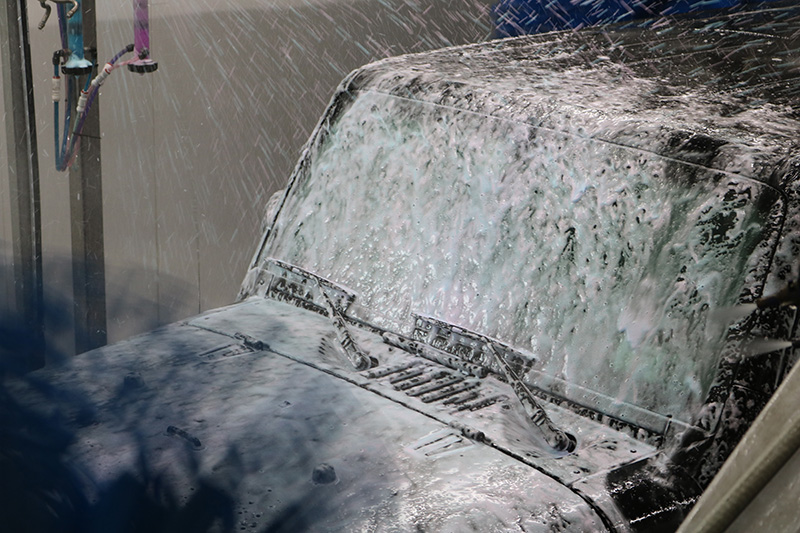 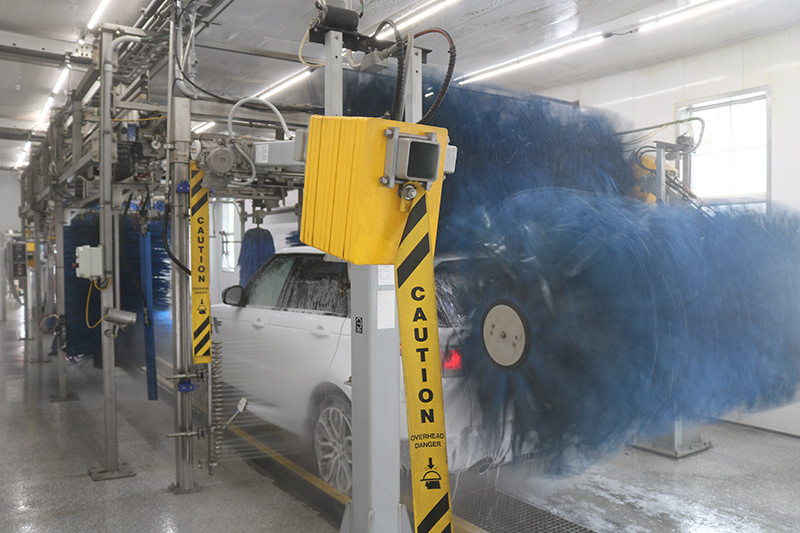 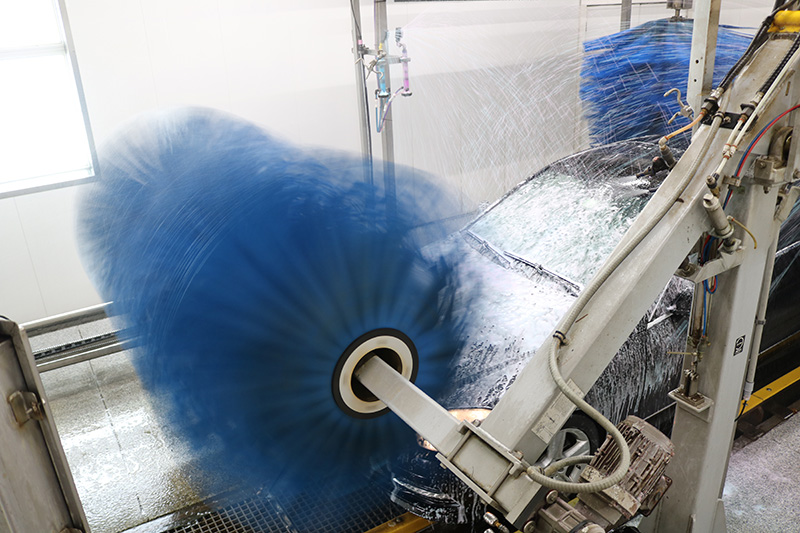 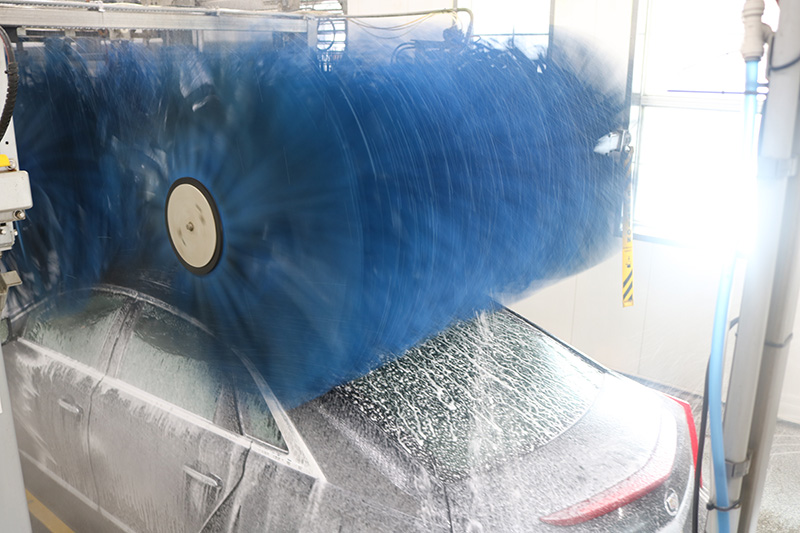 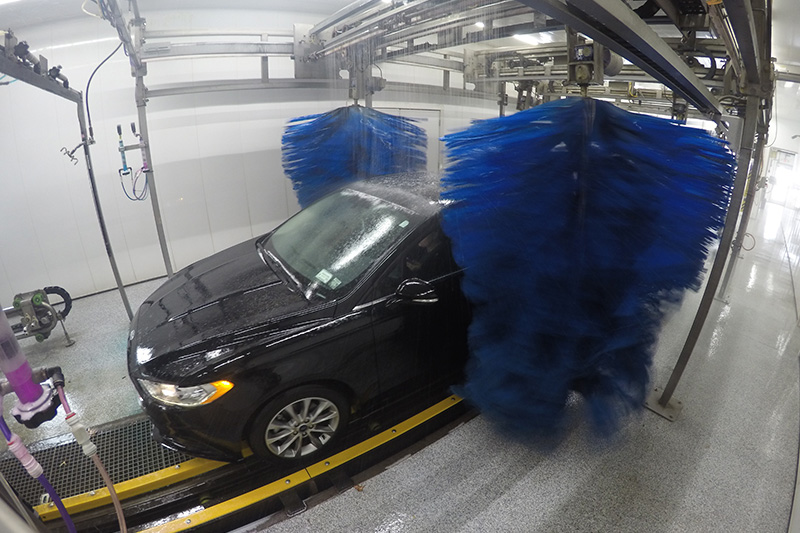 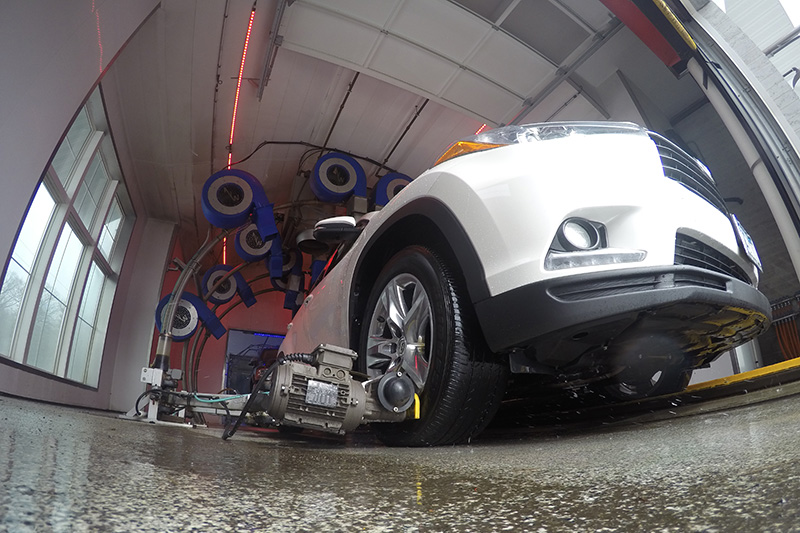