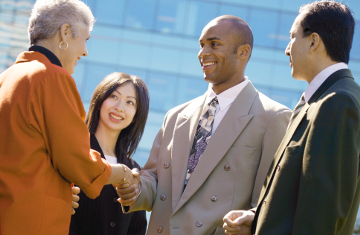 TAMARAC, Fla. — SONNY’S The CarWash Factory has announced a new partnership with Chinese A&T Car Wash Systems, according to a press release. The company is the newest SONNY’S Select Service Organization member.

The growth in car ownership in China has created a need for additional state-of-the-art carwash facilities in the country.

“The [carwash] operators we sell to demand equipment that delivers clean, dry, shiny cars every time, so that they can keep their focus on attracting and retaining customers, not repairing equipment,” shares Mr. Shihou Li, A&T Car Wash Systems owner and chairman of the board, in the release.

Li met with corporate staff and toured the SONNY’S executive offices and factory to commemorate the business relationship.

“I’m proud of the investments we’ve made over the years in SONNY’S software and in our automation process,” states Paul Fazio, CEO of SONNY’S The CarWash Factory, in the release. “In doing so, we have improved initial product quality which has enabled us to manufacture a product with a distinct value proposition and high quality standard that lets us sell directly to China, using a product designed and built in the USA.”

BIRMINGHAM, Ala. — The Convenience Network (TCN), iSIGN Media Solutions Inc. and Graphic Media Inc. along with its advertising sales arm, Engage Mobile Media Solutions LLC have signed a partnership to offer a complete digital signage and mobile advertising solution, according to a press release.

The solution will utilize iSIGN’s patented technology and hardware.

TCN’s network of 300 c-stores throughout the eastern U.S. will integrate iSIGN’s Smart Antenna and become part of the National Mobile Network (NMN).

Golden Pantry Convenience stores in Atlanta will be the first to install the technology.

The partnership expects to announce an expansion into 2,000 locations in the top 15 markets in the U.S. in the coming weeks. The expansion is expected to reach more than 25 million smart phones per day.

In the release, Tint World CEO Charles J. Bonfiglio shares that his company is “proud to gain franchise developers with strong business and customer service skills who are dedicated to our business principles.”

KUALA LUMPUR, Malaysia — Automechanika Kuala Lumpur, to be held March 19-21, 2015, at the Kuala Lumpur Convention Center, expects a 73 percent increase in European exhibition space, according to a press release.

More European countries—including Italy, Bulgaria and Poland—are participating than even before. More of the continent’s countries are expected to sign up in the coming months.

The Malaysian market’s stability continues to attract companies from around the world. In Malaysia there are 341 cars per 1,000 people, so strong aftermarket potential exists for auto components and accessories firms.

Trade agreements including the Malaysia-Turkey Free Trade Agreement provide a platform for greater trade between the regions. The show’s European pavilion offers exhibitors special upgrades on booth design and other bespoke services.

Analetto spoke on the importance of making changes and trying new things to grow business. He also showcased struggling washes he worked to turn around.

During his 25 years in the industry, Analetto created the original Xtreme-Xpress Mini Tunnel.

Conte also presented a $1,000 check to Kayla Lucia, the 2014 CWONJ scholarship winner. Lucia is a student at Monmouth University in Long Branch and a part-time employee of Madison Carwash & Detail Center in Madison.

DIAMOND BAR, Calif. — Students preparing for careers in the auto or auto parts industries can apply for scholarships through the 2015 SEMA Memorial Scholarship Fund, according to a press release.

The program offers financial assistance of up to $5,000 to help foster the next generation of automotive aftermarket industry leaders and innovators.

Scholarships are available in a variety of categories, including: accounting, sales and marketing, and engineering.

The deadline to apply is April 1, 2015. Interested students should go to sema.org/scholarships to apply.

ARVADA, Colo. — Mark VII Equipment Inc. has named Chris Andersen as its new CEO, according to a press release.

Andersen will replace retiring CEO Steve Jeffs after a transition period. Jeffs has held leadership positions in the WashTec group for the last 10 years.

Andersen's background includes 10 years in various senior level positions in sales, marketing and management with Hilti, a Liechtenstein-based provider of products, systems and services to the global construction industry.

“Chris will be a great asset to Mark VII,” says Jeffs in the release. “Under his leadership, and with the support of the Mark VII team, I'm confident North America will play an important role in WashTec's growth strategy.”

Mark VII is the North American subsidiary of WashTec AG of Germany, the world’s largest manufacturer of vehicle cleaning systems.

PARKLAND, Fla. — Rising Tide Car Wash COO Tom D’Eri was selected as one of the Miami Herald’s 20 Under 40 Emerging Leaders in 2014, according to a press release.

D’Eri, 25, is the list’s youngest honoree to date. He was selected from among 300 nominations.

For its list, the Miami Herald chose leaders who are self-starters and contribute to their communities.

D’Eri and his father started Rising Tide in April 2013, which seeks to empower individuals with autism to build careers and full lives through employment with a premium carwash brand. D’Eri’s brother is one of these individuals.

The carwash is one of the largest employers of people with autism in the U.S.

MINNEAPOLIS — Airlift Doors has promoted Sabrina Shrack to the position of sales account manager, according to a press release.

Shrack has been an employee since 2008, and previously served the company as new sales account manager.

In her new role, Shrack will manage new and existing accounts, establish customer relations and support the rest of the sales team.

Shrack is a graduate of Alexandria Technical College. She has six years of experience in overhead door sales and management.

KINGSPORT, Tenn. — Eastman Chemical Company has appointed Daniel McManus as industrial and institutional industry manager, according to a press release.

McManus has 30 years of experience as a director of manufacturing and industrial sales manager.

McManus joined Eastman in 2010 as account manager. His role included business development, relationship management and distribution channel growth for coatings and other additives.

McManus will lead Eastman’s expanded focus to include an emphasis on offering differentiated solvents and other high performing additives that enhance the performance and safety of cleaning formulations.