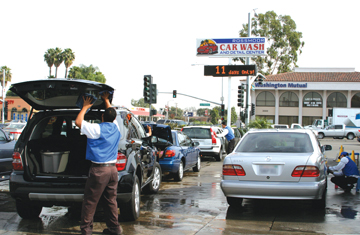 Rossmoor Car Wash and Detail Center has stood on the same lot for 50 years and, according to the Owner Brad Hooper, has kept the same values through the half-century.

Rossmoor Car Wash and Detail Center has stood on the same lot for 50 years and, according to the Owner Brad Hooper, has kept the same values through the half-century.

Hooper credits his father, Foster Hooper, for the longevity of Rossmoor Car Wash and Detail Center. Foster Hooper at one point had another carwash but eventually sold it and focused on making the Rossmoor location stand out from the cluttered Southern California market.

Under his father’s guidance, Brad washed his first car at Rossmoor when he was just 12 years old. By the time he was 14 he was on the schedule during the summer.

“I started on towels and worked my way up. By the time I was a teenager I was service advisor,” Hooper said during a phone interview with PC&D. “I was learning the business, never thinking that someday my dad would approach me and ask me if I wanted to buyout his partner. Which we did 14 years ago.”

At first Brad thought, “how hard could it be?” He had grown up around the business, save for his time at college and a few years after.

“Full-service carwashing is a lot more — even if you already have experience as a kid – it’s a lot more work and effort if you want to run a quality operation,” Hooper said.

Given his new role Hooper began getting involved with the Western Car Wash Association, which he now serves as Vice President. He has made it a point to make himself visible, attending every trade show and convention. He used the advice he would get from seasoned owners to make his carwash even better and has made it a point to, in turn, share his knowledge with new owners.

Hooper says some of the biggest changes in the industry occurred when fuel prices started hitting $4 a gallon.

“It’s a heavy burden when you had just put $100 in your tank,” Hooper said. “Then you’re looking over at the carwash across the street saying, ‘maybe I’ll wait another week.’”

But Rossmoor has survived in part to their customer base who keep coming back, despite having many other options in Southern California – self-serve, automatic, in-bay. Hooper said he has no plans to turn the location into any of those other washes.

“One of the reasons we stay full-service is that the customers still support full-service,” Hooper said. “People who look at our wash see us as a full-service carwash and detail.”

Their detail business is authorized by McGuiar’s and Rossmoor is known for their “10 Point Promise” which is:

They’re also known for having a detail oriented and honest staff. Hooper told stories of his employees finding wedding rings and, in one case, someone’s rent money under a seat. Found items are always returned.

“It’s that kind of relationship you have to have,” he said.

It’s this commitment to customer service that has led to generations of return customers and, as long time customers’ children reach driving age, they too are coming to the Rossmoor carwash.

“I was picking up my son from a graduation party the other night and one of his classmates who I had never met came up to me and said, ‘I love your carwash,’ “Hooper said. “We seem to be adopting a younger generation, too.”

Realizing his business needs to adopt this younger generation he has started a Facebook page for Roosmoor.

“We’re doing more and more outreach,” he said. “But we try to do most of our marketing internally.”

One of the ways Hooper markets internally is by working closely with community and not-for-profit groups.  According to the wash’s website Rossmoor has donated more than $1 million dollars by way of fundraisers. The website also explains that non-profits who work with a professional car wash always tend to raise more money than parking lot washes because they have the capacity to handle large volume, not to mention professional washes are far more environmentally friendly.

Hooper said that he was once told the neighboring city of Los Alamitos has more non-profits per capita than any place in the United States. Because of that Hooper has had to design very strict guidelines for his donation process, but he rarely says no. He says he fulfills about 50 requests per month ranging from silent auctions to on-site fundraisers. He also had a reader board installed on his property so non-profits and local schools can post any messages and bulletins they might like.

“We give away tens of thousands of dollars in services every year,” he said.

Like any good businessman Hooper realizes he has a reputation to live up to. The Southern California market is flooded with full-service carwashes but Hooper says many of them do not hold themselves to the same standard Hooper does.

“We’ve always sold ourselves on, ‘Hey, we’re going to charge you a fair price and we have to charge you a certain price because we do business the right way,’ Hooper explains. “Unfortunately in Southern California many carwashes have a reputation of not treating their employees right … We take good care of not only our employees … We don’t have a lot of turnover.”

To this day Hooper is not above putting himself in the processing line, grabbing towels just like when he 12 years old. He is not the type of owner who just writes himself a check every week and goes home. He takes pride in the fact that still works with his employees, whether it is side-by-side the new guy or the employee that has been with Rossmoor for 30 years.

“The employees that have been there for 30 years knew me as a kid,” he said with a chuckle. “They know I am not afraid to get my hands dirty … I will get in there to show them firsthand what my expectations are and they will see me do it … I think that’s important.”

Hooper says this mindset is one of the reasons his carwash has stayed not only in business, but also in his family, rather than changing hands every couple of years like he has seen recently in his market.

Although Rossmoor has been in the Hooper family for two generations, Brad is still not sure if the next owner will bear the Hooper name.

“The one thing I don’t want them to be thinking about is that they have an easy route if something else doesn’t work out,” he said emphatically. “I want them to really stay focused on their future and do really well in school.”

He said a lot of kids whose parents own a business think they can make an easy paycheck by simply taking over whatever company their parents owned. But he said if one of his children was to show interest, and the work ethic, to take over he would certainly have that conversation.

“I do show them the business … I explain things to them about the business,” he said. “I want them to appreciate how a dollar is made. I’d love for it to be passed down to another generation. But only time will tell.”

Advertisement
In this article:full-serve carwashes, Profiles