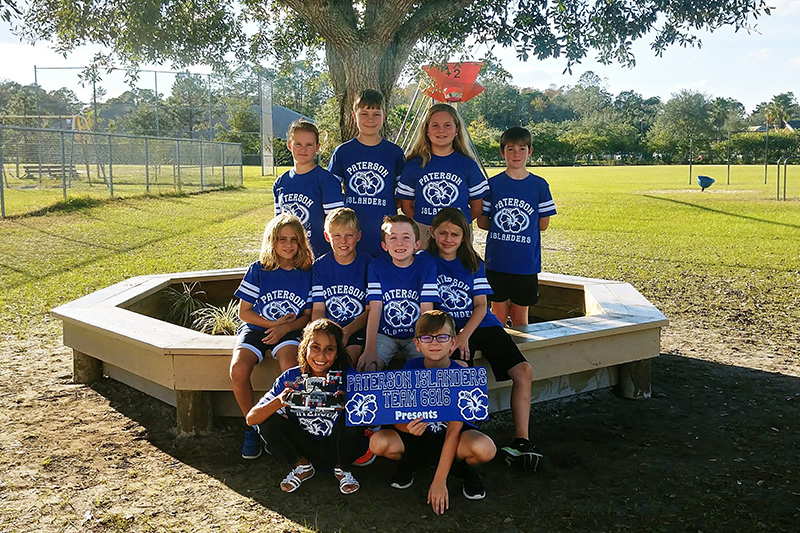 A group of students looks to put an end to charity parking lot washes.

Every year, students from 80 countries around the world and ranging in ages from eight to 14 participate in the F.I.R.S.T. LEGO League’s (FLL) tournament season. The F.I.R.S.T. (For Inspiration and Recognition in Science and Technology) LEGO League is comprised of teams of students that build a robot to complete missions that are introduced at the beginning of each season, but it’s more than just robots.

Teams must also research a problem and develop a solution around the year’s theme that is unveiled in August of each season. This year’s theme is hydrodynamics — the way we use, dispose, transport and/or find water. One team from Fleming Island, Florida, found its solution at the local carwash.

The Paterson Islanders is a team of 10 students from Paterson Elementary in fourth to sixth grade, led by coach and elementary school teacher Jen Seco. When they began their research in September 2017, they began to look at the way they each used water in their daily lives, from brushing their teeth and doing dishes to washing their parents’ cars.

Through their research, based on such sources as www.greenoptions.com, the Los Angeles Times, the International Carwash Association (ICA) and the Southwestern Water Conservation District, they learned that washing their cars at home used on average between 100 to 150 gallons of water or 10 gallons of water per minute.

Related: The demise of driveway washing

The students then learned that the biggest offenders of water waste were charity carwashes. They also learned that the amount of water used is not the only problem. According to a brochure published by the Mid-America Regional Council, “Charity carwashes hold these events on paved surfaces that offer no protection from the runoff that goes back into our water supply.”1

But then, the Paterson Islanders learned about the many benefits of commercial carwashes, like how they have been working to conserve water for decades and use a third of the amount of water, averaging about 35 gallons of water per car. They also learned that a lot of carwashes recycle their water as well.

When they learned about the waste that carwash fundraisers produce, they knew they needed to provide a solution and come up with an alternative for teams and other charitable organizations to still raise money while carwashing in an environmentally friendly way.

They talked to their local cheerleaders and the Police Athletic League, which both recently held carwashes at a restaurant and a local business respectively; they asked both groups how holding a charity carwash benefits them.

It turned out that charity carwashes are a huge fundraiser. Most of the supplies are donated, and teams can earn an average of $300 in as little as three hours.

The students knew they needed to offer a solution that would both benefit the team trying to raise money and reduce the impact of water usage and runoff. So, they began contacting commercial carwashes to see if any would be willing to meet with them and develop a partnership.

The Paterson Islanders met with local carwash owner Charles Holt from Charles & George’s Car Wash to see if he would be willing to partner with us to test our project. Our goal was to see if we could raise the same amount of money as a charity carwash by selling tickets to his carwash for a percentage of the profits.

Holt was so excited about the idea that he donated 20 carwash tickets to the team to sell for donations. Holt believes that having charities partner with a commercial carwash not only helps reduce the impact of our use of water but also assists both the team as well as businesses like his. With those 20 carwash tickets, he hopes to gain 20 new, regular customers.

Then, the team of 10 students set out with a mission to raise money and began to sell their tickets. The idea was so popular that they sold out of tickets in less than a day.

The team knew it was onto something. What if we could help both our local carwash businesses and local charities while reducing the impact on the environment, just by developing a partnership?

In December 2017, the Paterson Islanders competed at their local qualifying tournament at St. John’s River State College to present their research. Their research project presentation and hard work earned them first place in Project Research and a handsome trophy to display.

Charity carwashes are nothing new, but the team hopes that other organizations looking to raise money will see in a new light the way these functions are held and the true impact that they could have. It is time to rebrand the carwash fundraiser.

Jen Seco is an elementary school teacher and robotics coach at Paterson Elementary in Fleming Island, Florida, where she has taught for the past 10 years. This year’s research theme of hydrodynamics has helped her gain a new appreciation for the commercial carwash industry.

Uncategorized: Thank you to our readers