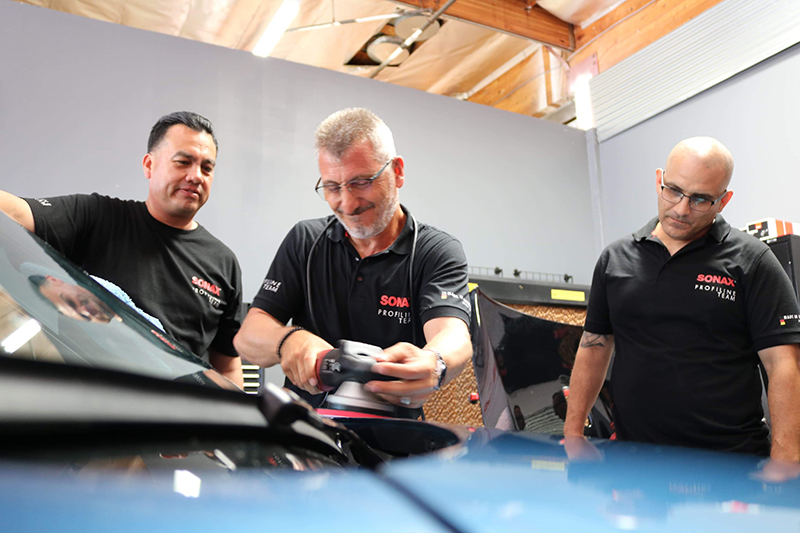 This week, we cover a detailing certification, a remodel, a grand opening, construction and a new company distributor.

This week, we cover Rigo Santana’s detailing certification, a remodel, a grand opening, construction and a new company distributor.

Any Master certification takes years to attain and is based on in-field experience, continuous training and — in Santana’s case — a focus on specializing in classic, custom and exotic car care, the release continued.

Santana has a long history of working with SONAX, a manufacturer of high-performance car care products and long associated with Formula 1 Racing, the release noted.

Rob McCrary, managing director for SONAX USA, said the company is proud to announce the certification of both Santana and Sergio Fierro, a Santana protégé, as Master Trainers for SONAX USA, the release added.

“We have known these guys for some time and have grown to respect what they do and how they do it,” McCrary said. “We are happy that they have selected SONAX as a partner and are now trained on the SONAX line of products to the point where they can support others while working with the brand.”

Santana most recently worked with the SONAX team as a member of the Indianapolis Motor Speedway Museum (IMS) Preservation Team, the release noted.

He is also a former member of the Air Force One Detailing Team at Seattle’s Museum of Flight and for the McCall’s Motorworks Revival and The Quail Detailing teams at Monterey Car Week, the release added.

“Sometimes I have to pinch myself to believe how far I have come from sponge-washing cars at a carwash in south-central Los Angeles,” said Santana. “But most of all, I want to thank SONAX for the opportunity to work with them on so many prestigious detailing projects. They have given me the opportunity to hone my skills and think on my feet.”

Santana is also the founder of the Nueva Generacion de Detalladorese Network (NGDD), which is the only Spanish-language automotive detail training in the U.S., the release stated.

He recently acquired his International Detailers Association (IDA) Recognized Trainer (RT) status, and he and Fierro will be training dozens of detailers in Puerto Rico in late July, the release noted.

In addition to getting an NGDD detailing certification, Spanish-speaking detailers can also, for the first time, get their IDA (CD) and advanced skills validated (SV) certifications as well, the release added.

“I want to encourage Latino detailers to pursue their dreams, because you never know what doors will open when you dedicate your career to what you love in the pursuit of perfection,” Santana said.

“SONAX looks forward to many years of working together with Rigo and Sergio and supporting one another in our activities,” said McCrary. “Their commitment to the industry and their businesses is a model to follow for many.”

CLINTON, Iowa — According to www.clintonherald.com, Awesome Car Wash is now not only offering 24-hour services in the in-bay automatic section of its business, but it has also opened a new, state-of-the-art express wash tunnel that can wash up to 100 cars per hour.

The newest additions to the wash, which ended up being a project costing “well over $1 million,” according to owner and operate Tom Tiefenthaler, also included expanded vacuum services.

Furthermore, the carwash has instituted a new monthly club membership, the article noted.

“This is all about giving the people what they need,” Tiefenthaler said. “Better facilities, top-of-the-line services and really a facility that never closes is a way for us to stay progressive and stay current.”

Tiefenthaler said the location has “always been busy,” and the numbers prompted the need for new, expanded services, the article noted.

Recent technology changes also threw “a learning curve” at Tiefenthaler and his employees, but he said their adaptation to the newest tools will allow them to better serve the community, the article continued.

“We went from riding a bicycle to jumping on a Harley-Davidson,” Tiefenthaler commented.

HUNTSVILLE, Ala. — According to www.whnt.com, Shine Time Super Wash at 2707 University Dr. held a grand opening celebration and charity drive on July 19th.

From 8 a.m. to 8 p.m., customers received a free carwash, and in return, Shine Time encouraged customers to donate to the Huntsville Hospital Foundation, the article continued.

The proceeds will benefit the Foundation’s Miracle Bash event and the NICU at Huntsville Hospital for Women & Children, as the Foundation plans to use the proceeds to expand the Region NICU to better serve sick and premature babies from North Alabama, the article noted.

Prior to the opening, Shine Time Super Wash Partner Mike Reiney said the cause is personal, adding, “All three of my children used services provided by the NICU, and I understand how important it is to have access to lifesaving equipment and technology like Huntsville Hospital for Women and Children’s NICU provides. We hope everyone can come enjoy a free carwash while making a donation to benefit these babies and families in our community.”

Locally-owned Shine Time said it offers unique amenities, such as an express detail polish, one of only five in the country, the article concluded.

Three news carwashes to open in Neenah and Menasha

APPLETON, Wis. — According to www.postcrescent.com, three carwashes are under development in Neenah and Menasha, Wisconsin.

In Neenah, Diamond Glow Car Wash is under construction at 1190 Westowne Dr., the article stated.

“We hope to be open late August/early September,” said Marketing Manager Melissa Lamine. “We are ensuring everything is up to standard as we currently install the carwash equipment unlike any other around the area.”

Dean Lamine co-ownes the carwash; he also owns the Spencer Street Best Wash and Clear Water Car Wash, both of which his father, Dale Lamine, founded, the article continued.

Menasha’s plan commission approved two carwash site plans, as, according to Sam Schroeder, community development director, “Their market studies have shown there’s a need for these facilities in this area.”

Menasha Express Wash, owned by Peak Inc., will be an automated carwash built at 1335 Oneida St., and it will feature an indoor pet washing station, the article noted.

DARIEN, Ill. — Aqua Bio Technologies has announced that it has expanded into the Middle East, according to a press release.

“We were really impressed by the water treatment technologies that Aqua Bio Technologies brings to the table,” said Ibrahim Niazy, president of Sparkling Shine Company Ltd. “We believe our partnership will contribute to the Saudi Arabian ongoing reforms and its Vision 2030, and will play an important role in spreading the adoption of technologies that conserve the environment.”

“Our partnership with Sparkling Shine Company Ltd. is an important moment for Aqua Bio Technologies as we initiate global expansion by delivering our state-of-the-art water recycling systems to the Middle East,” said John P. Gibney, vice president and general manager of Aqua Bio Technologies LLC. “We expect our entry into the region to emulate the same trajectory of success we have already achieved in North America.”