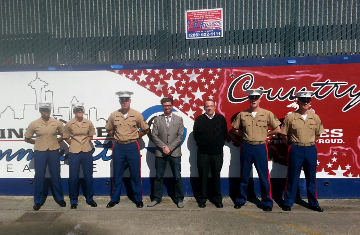 SEATTLE — A permanent mural is on display to the public at Brown Bear Car Wash, according to a press release.

The mural was created as part of Marine Week Seattle, which runs until Sunday, Aug. 3, to celebrate the connection between community, country and the U.S. Marine Corps, said the release.

A five-member Marine Mural Team created the mural over several days with products donated by Sherwin Williams. The mural was unveiled July 25 to the public.

Brown Bear will maintain the mural in the future, which serves as a gift on behalf of the Marines to Seattle citizens.