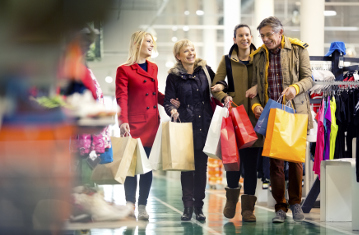 NEW YORK — Local businesses saw a 14.9 percent increase in shoppers on Small Business Saturday compared to last year, a day meant to kick off the holiday shopping season for small, local retailers, according to a press release.

The results come from the Small Business Saturday Consumer Insights Survey, released by the National Federation of Independent Business (NFIB) and American Express, said the release.

The average spending per person was down 11.5 percent from the previous year, but overall spending was up because of the increase in shoppers on the special day, noted the release.

Sixty-seven percent of the U.S. population was aware of the day, reported the release. These consumers spent $14.3 billion with independent retailers and restaurants, up 2.1 percent from 2013.

“More Americans recognize the direct link between shopping locally and stronger communities and that’s an extremely positive result,” said NFIB President and CEO Dan Danner, in the release. “We’re delighted by the success of Small Business Saturday but we’re even more excited by the growing commitment among Americans to give small businesses a chance to compete all year round.”

The fifth Small Business Saturday was held Nov. 29 to support local businesses, boost the economy and preserve neighborhoods around the country, stated the release.