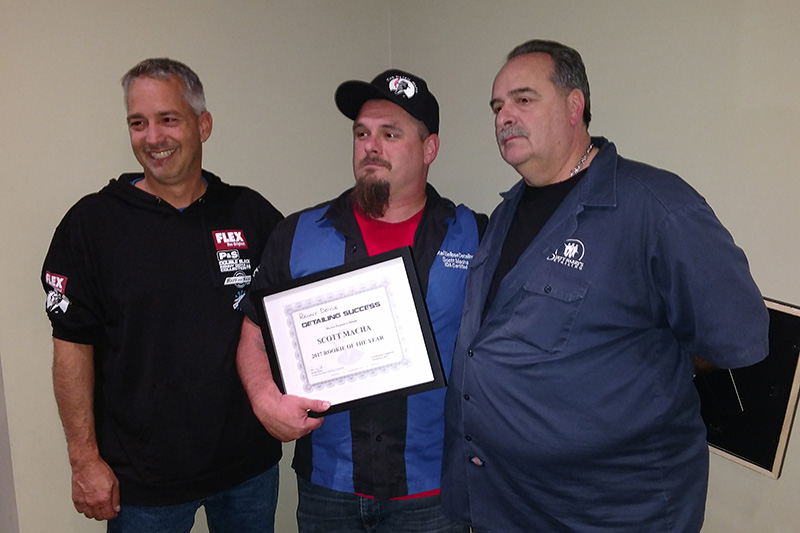 In this edition of Market Focus, we cover some Detailing Success awards, a recognition, a milestone and grand openings.

LAS VEGAS — Three longtime “made-men” of the famous Detail Mafia and five-term members of the Air Force One Detailing Team at Seattle’s Museum of Flight — both of which are prerequisites — were awarded Master’s Certifications at the Annual Detailing Success Meeting & Continuing Education Event at the Specialty Equipment Market Association (SEMA) show in Las Vegas, according to a press release.

The men are Bob Wiener, Bill Quinn and Kyle Clark, the release stated.

Detailing Success is the only detail training organization in the detailing industry to offer true Master craftsmanship status achieved over a period of years, the release continued; to date, there are only 12 Masters among the 100+ members of the nationwide Detailing Success Network.

According to the release, a Detailing Success Master requires four to five years of continuous growth and development in five major areas of detailing:

Masters must also be “Made-men” of the Detail Mafia and members of the Air Force One Detailing Team for at least three years, the release noted, in addition to holding certifications from the International Detailing Association (IDA) and a Detailing Success Business, Skills, & Paint Correction certification.

All three men have held leadership and supervisory positions on the AFO Team and have served as mentors to many rookie detailers within the detailing Network; furthermore, they have appeared on episodes of Velocity TV’s popular Competition Ready with AutoGeek host Mike Phillips.

According to a separate press release, Maine’s only Air Force One Detailer, Scott Macha of Total Eclipse Auto Detailing & Design, was selected Rookie Detailer of the Year at the Annual Detailing Success Meeting & Educational Event at the Specialty Equipment Market Association (SEMA) show in Las Vegas.

Macha was also inducted as a “Made-Man” into the famed Detail Mafia, making him a celebrity guest in the Flex exhibit at SEMA, the largest automotive aftermarket trade show in the world, where he demonstrated the versatility and proper use of the professional Flex machine polisher line to thousands of attendees, the release continued.

“I have been working towards becoming a member of the Detail Mafia ever since being chosen for the Air Force One Detailing Team this past spring, one of the most prestigious opportunities in which I have ever had the pleasure of participating,” said Macha. “To have achieved the level of Mafia was somewhat expected, but I was completely blindsided by being chosen Rookie Detailer of the Year. There are so many excellent detailers in the network; I am genuinely honored to have been chosen from among my peers.”

MINNEAPOLIS-ST. PAUL — Minne Inno, a digital media company covering local innovation economies, announced today that Hydra-Flex has earned a spot on its inaugural 50 on Fire, according to a press release.

The 50 on Fire list reflects 50 businesses or individuals that are driving substantial change to the region’s economy through innovation, the release continued.

“The companies honored on the 50 on Fire list demonstrate the creative innovation that exists among the Twin Cities’ business community,” stated Jaime Harris, CEO of Hydra-Flex. “To be recognized on this list as a manufacturer amidst technology, agriculture and civic engagement companies is a testament to the inventive people, products and processes we have at Hydra-Flex.”

“Every story and newsletter published by Minne Inno seeks to highlight local individuals and businesses driving change in Minnesota,” stated Maddy Kennedy, reporter for Minne Inno. “With our first 50 on Fire celebration, we want to shine a little extra light on the ones that are truly setting the scene on fire.”

AKRON, Ohio — Just four months after shipping seven million FastPass Tags, DRB Systems has shipped yet another million, with Golden Nozzle being the recipient of the eight millionth tag, according to a press release.

Golden Nozzle awarded customer Ashley Babcock with the eight millionth tag and a free unlimited wash pass for one year, the release continued.

LOUISVILLE, Ky. — Mike’s Carwash has officially opened a second location in Louisville and is about to make double the splash in the community, according to a press release.

To celebrate the grand opening, Mike’s will host a Free Ultimate Wash Week from Nov. 17-26 at 1323 South Hurstbourne Pkwy (Mike’s Carwash will be closed on Thanksgiving Day, Nov. 23rd), the release continued.

Any customer who visits the new Mike’s location during the grand opening week will receive an Ultimate Wash — a $20 value and a Mike’s Fan Favorite that includes FastWax, wheel bright, underbody and tire shine — free of charge, the release noted.

All donations collected during the event will support a local non-profit, the Dream Factory of Louisville, the release stated.

“We could not be more excited about our second Louisville location and to host a Grand Opening Free Ultimate Wash Week,” said Mike Dahm president of Mike’s Carwash. “We love our grand openings because we get the opportunity to wow our customers with outstanding customer service while also supporting the community by partnering with a local nonprofit organization.”

The Dream Factory of Louisville is the largest children’s wish-granting organization that does not limit its mission to children who have life threatening illnesses, the release added.

The organization believes children with chronic illnesses and disorders also suffer from substantial emotional and physical pain, so they strive to provide hope and relief from trauma and corresponding stress and depression that both the children and families can endure on a day-to-day basis, the release noted.

Doctors agree that providing a dream can improve the quality of life for these children and extend the life of a critically ill child, the release concluded.

ASHBURN, Va. — State-of-the-art vehicle reconditioning company Automotive Quality Solutions (AQS) is happy to announce that it has been crowned Innovative Business of the Year at Loudoun County Chamber’s 23rd Annual Small Business Awards, according to a press release.

The company took home top honors for the forward-thinking approach it uses to manage its business and its one-stop-shop, environmentally-friendly approach to automotive detailing and reconditioning, the release continued.

“I’m incredibly proud of our team and the recognition their hard work has earned,” said Daryl Collette, founder and president of Automotive Quality Solutions. “The Loudoun County Chamber was searching for the best-of-the-best in small businesses and entrepreneurs in our community. Our team brings combined decades of experience in delivering exceptional service, and we’re glad the blue-ribbon panel recognized our commitment to customer-led innovation.”

In addition to providing auto reconditioning and detailing services for consumers, the release noted, the AQS approach is having meaningful, positive impacts on the business of their auto dealer customers.

Dealers now have an “all under one roof” solution for vehicle reconditioning services, which eliminates the need for multiple vendors, improves time-to-market for vehicle inventory, and boosts profits on the dealer’s lot, the release added.

“We’re grateful to be working with AQS and are very happy they’ve earned this recognition,” said Trey Rodgers, general manager of Browns Fairfax Mazda. “The convenience and level of service they provide has increased the number of vehicles we sell at full-retail price and contributed to a higher sales volume. We also don’t have to manage a bunch of different vendors anymore coming and going from our lot. It’s simplified our entire process. AQS is challenging the status quo and changing the way we do business.”

FORT COLLINS, Colo. — According to an article from www.coloradoan.com, Breeze Thru Car Wash purchased Richie’s Car Wash at 3141 S. College Ave., giving it two locations in Fort Collins and a total of seven throughout northern Colorado and southern Wyoming.

Richie Frank owns a second Richie’s location in Parker, Colorado, but he wanted to retire from the Fort Collins location, the article continued.

“Richie’s Fort Collins location was built in approximately 2003, and we have always been good friendly competitors,” said John Agnew, co-owner of Breeze Thru Car Wash. “Richie had a real emotional attachment to this carwash and his customers. He wanted us to have it because he likes the way we do business. We’ve gone back and forth regarding Breeze Thru buying Richie’s for about eight years and finally made it happen.”

Agnew claimed that he’s been trying for around nine years to get a location on the south side of Fort Collins, and this location now fills that gap, the article noted.

Breeze Thru will invest $700,000 in rebranding the location, the article stated, including adding a central vacuum system for free vacuums, automated pay stations and updated wash equipment.

The new exterior-only location will open in early December and offer free washes to customers for two weeks, the article concluded.

NORWALK, Ohio — Buckeye Express Carwash is offering free washes to all customers on Nov. 17th on its first official day in business, according to an article from www.norwalkreflector.com.

“We are a friction wash and it’s a whole show,” Brandi Kline, management team member, said. “From the lights, to the bubbles, to the smell — everything that you go through, it’s a whole experience. Plus, customers will receive a free air [freshener] and towel with every wash.”

One aspect that sets this wash apart, according to Kline, is that the automatic wash also includes a projector show that displays images on the windshield, the article noted.

Furthermore, the carwash will offer free vacuums and have a monthly unlimited plan at $17.99, the article concluded.