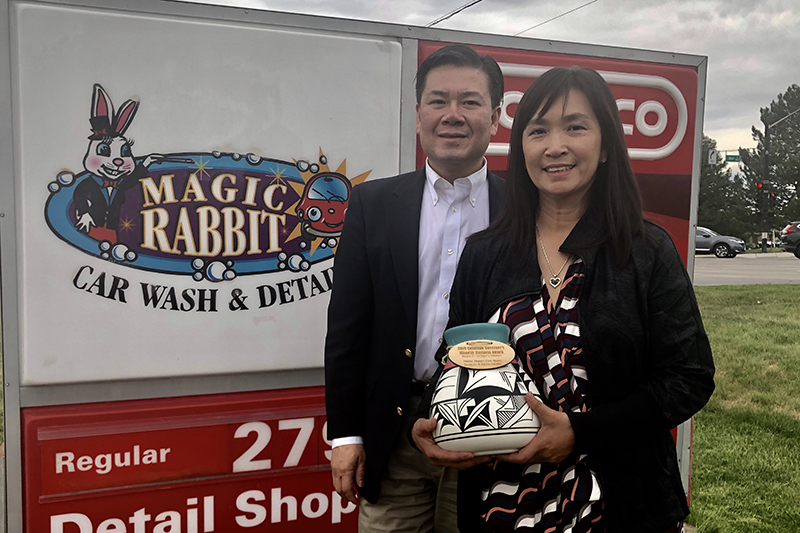 This week, we cover an award, a promotion and grand openings.

This week, we cover an award for Magic Rabbit Car Wash, a promotion and grand openings.

DENVER — Magic Rabbit Car Wash and Detail, which has locations at Parker, Highlands Ranch and South Aurora, Colorado, is the only Asian business that won the inaugural Governor’s Minority Business Awards, according to a press release.

Magic Rabbit’s owner, Kevin Leung, who is also a Douglas County School board director, and his wife, Shirley, were honored at the 2019 Advance Colorado Procurement Expo luncheon May 16th at McNichols Civic Center, the release continued.

There were a total of nine winners statewide, and Magic Rabbit Car Wash was being honored in the medium-size category at Region 2, the release concluded.

Barnett joined the company in 2010 as director of marketing, overseeing branding, advertising and community relations, the release continued.

Her role as vice president has expanded to include new store development, operational standardizing and customer and staff relations, the release noted.

“During the last nine years, Lanese has added significant value to our team. She has leveraged her experience outside of the carwash industry to foster continued growth and strengthen our brands across the board,” said Tom Miller, president of TG Miller & Co. “She has garnered the highest respect of her colleagues and industry peers.”

“I am honored to accept this new role,” added Barnett. “The carwash industry is dynamic and constantly evolving. To stay relevant, we must continue to take on new challenges and remain focused on our growth and innovation.”

She is a graduate of Southwestern University in Georgetown, Texas, the release concluded.

WESTBOROUGH, Mass. — According to www.csnews.com, Cumberland Farms opened its first AutoSpa carwash at 985 Pleasant St. in Bridgewater, Massachusetts, on May 22nd.

The carwash is open 24 hours a day, and customers can purchase a wash at the carwash’s kiosk, at a Cumberland Farms fuel dispenser when purchasing gas or inside the convenience store at checkout, the article continued.

The prices range from a $9 express wash to the premium $19 package, the article noted.

The carwash held a ribbon-cutting event on May 22nd, where attendees were also able to sample Cumberland Farms’ menu items, including Mac N’ Cheese Bites, pizza and its signature Farmhouse Blend coffee, the article added.

The ribbon-cutting also started off a two-week fundraiser for The Cumberland Farms Military Affinity Group, which supports nonprofit organizations that aid disabled veterans, the article stated.

During the fundraiser, $1 from all AutoSpa washes will go directly to the group, the article noted.

“We’re excited to open our first AutoSpa,” said David Heilbronner, director of brand strategy and advertising at Cumberland Farms. “We hope our customers take advantage of the added convenience that this carwash offers by being located at their local Cumberland Farms where they can also fill-up with fuel and enjoy a meal or a quick snack.”

CHICAGO — According to The Chicago Tribune, The Wet Spot Car Wash celebrated its grand opening on May 4th with a ribbon-cutting event at 10500 S. Harlem Ave. in Palos Hills.

Kalid Baste, president of Wet Spot Car Wash Inc., said drivers can stay in their vehicles during the wash or watch from a waiting room as their cars are washed, the article continued.

This is Baste’s first carwash, but he plans to open more, though the Palos Hills location will continue to be the company’s headquarters, the article noted.

The carwash is open every day, and prices start at $3 while monthly wash passes are $17, the article concluded.