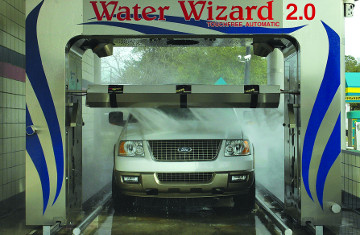 MADISON, WI — Customers are using carwash bays to show support for the candidates in the recall race for governor here, channel3000.com reported.

The May 22 story stated that customers who see the signs above the two bays at each of Magic Car Wash’s two locations can choose either Democrat Tom Barrett or Republican Governor Scott Walker.

The carwashes tally the votes each day and post them on their signs. So far, each candidate is winning a location.

Magic Car Wash Owner Dan Foor said he started the carwash poll, “wash ‘n’ vote,” in 2008 after he received numerous robo-calls and phone calls. He felt the existing surveys were lopsided, and he thought someone should create one that was anonymous.

“Our customers predicted Obama’s win. They predicted Walker's last win, but this time I think it’s going to be different because, with two locations, one side is favoring Walker and one side is now favoring Barrett by a huge margin,” Foor said in the story.

Foor stated that the poll is honest because customers simply choose a line and are not pushed either way. The carwash poll will continue right up through the election on June 5.

Advertisement
In this article:customer service, promotions